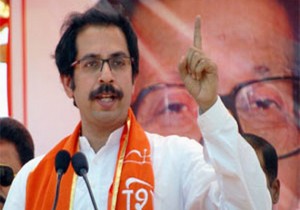 Amidst thunderous applause by party workers and leaders, Uddhav took the oath at his first public meeting after Thackeray’s death, in Kolhapur city in western Maharashtra.

“I hereby take a vow to fulfil all of my father’s dreams. As per his wish, we shall definitely achieve saffron rule in the state, ensure the progress of the Marathis and the Hindus, and put brakes on the downslide of Maharashtra,” he asserted with his right hand raised, in a tone reminiscent of his father’s style of speaking.

Noting that nobody could replace Bal Thackeray as the party ‘pramukh’ (chief), Uddhav said he had taken the responsibility of the party on his shoulders and sought support of all his activists in carrying it forward.

“You have reposed faith in me. I have taken this responsibility on my shoulders based on that trust. I shall not falter, but even you must not falter,” he exhorted the activists.

Indicating that the mourning period for the late Thackeray was practically over and it was time to get down to brass-tacks, he said: “This is not the time to cry, but to fight.”

“Wherever there is injustice to Marathis, Shiv Sena will be present,” he warned.

Uddhav described his tour as “non-political” with intentions to meet the “extended Shiv Sena family members” and sought their co-operation for achieving his father’s unfulfilled ambitions.

Accompanied by his wife Rashimi and top party leaders, he flew in to Kolhapur on the first leg of his five region tour. Similar meetings for various regions are slated for Nashik (Dec 5), Ratnagiri (Dec 7), Nagpur (Dec 14) and Aurangabad (Dec 16).

During these meets, Thackeray will meet grassroot activists from all the 35 districts of the state, besides workers of the Yuva Sena, headed by his son Aditya, and other party organizations.

Earlier, the party announced that all powers of party president would now vest with Uddhav.

An announcement in party mouthpiece ‘Saamna’ said the decision had been taken at a meeting of top party leaders at the Thackeray residence ‘Matoshri’ in Mumbai.

Uddhav, 52, has been the party’s executive president since 2004.

“The party’s first meeting (after Thackeray’s death) was held in ‘Thackeray Durbar’ (the room where a garlanded photograph of the leader has been placed on the chair he used) where all the leaders unanimously expressed confidence in Uddhav and decided to authorise him to fulfil the late Bal Thackeray’s dreams,” the statement said.

Thackeray, who founded the Sena and ran it for over four decades, died Nov 17.