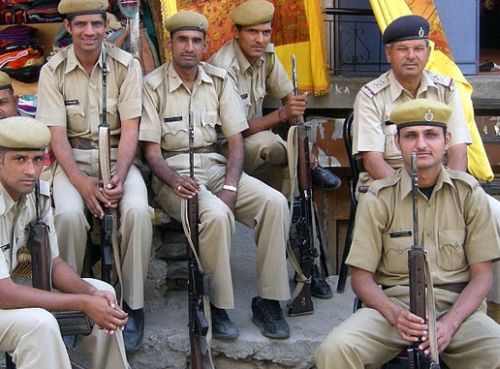 Shimla : Instead of concentrating on their jobs , top police officials of Himachal Pradesh are more interested in improving their cosmetic look , the colour of the state police force uniform —– as if it really matters !

First it was the widely accepted traditional khaki . But a couple of years ago the current DGP , D S Minhas decided that khaki must to be discarded and replaced by the more friendly and trendy looking blue . Calling it an image make over , as if matters !

So the blue uniform was introduced with much fanfare . But then the IPS officers objected and refused to don the blue dress saying like all IPS officers in the country they will stick to khaki . But unlike them DGP Minhas chose to wear blue .

And since the state police chief put on blue so did the entire police force over a year ago , other than the elite IPS officers .

The blue included a pair of dark blue trousers, a light blue shirt and a blue beret cap. Accessories such as shoes and belts remained black. Both men and women were required to wear the same uniform.

The uniform raged on , sometimes in the state legislative assembly , the state cabinet and even with the union home ministry which turned down the proposal .

Others said cops wearing the blue uniform made it hard to differentiate between security guards in shopping malls and Himachal cops , and so the debate moved in favour of reverting to khaki again , all this at the cost of the state exchequer .

On Friday the police board decided the entire state police force will revert to wearing the traditional khaki .

But it will take more than six months for the 16,000-strong state police force to switch back to the conventional dress.

Sources say there will be a huge expenditure to buy stocks of new khaki uniforms and dispose off the surplus stock of the present blue dress .

Media reports say government officials said it was a populist decision to revert to the old khaki as the state goes to the polls later this year.

The government does not want to annoy the state police employees welfare federation , which is opposed the blue uniform, the officials added.