Srinagar. Top rallyists from Kolkatta, Amittrajit Ghosh in the four wheel Xtreme category and Mohit Verma, a motorcycle rallyist from Bangalore came out winners in the 4th Mughal Rally, which concluded yesterday.

In all there were 120 rallyists from all over the country who participants in the two day event.

In Rally Xtreme, Amittrajit Ghosh of Kolkata took the top honours with navigator Ashwin Naik. Ghosh was driving a Mitsubishi Cedia. He had a lead of two minutes over Amanpreet Ahluwalia of Team Terrain Tigers, Delhi, with navigator Sandeep Mansukhani. Ahluwalia drove a Maruti Zen for the event. Third in this category was Abhishek Mishra of Jaipur, with navigator Sudeep Haldar. 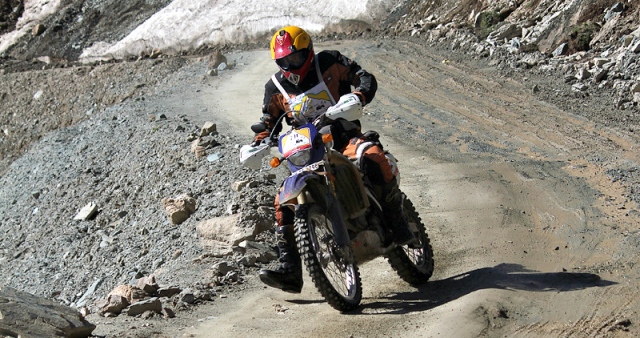 There was an upset in Rally Enduro (SUV category) too. National TSD champion Satish Gopalkrishnan of Bangalore was leading this category with navigator Savera D’Souza, driving a Grand Vitara. On Day Two, champion TSD rallyists Vishnu Singh and navigator Adithya Anthony of Bangalore wrested the winner’s crown from Gopalkrishnan with a lead of 30 seconds. Vishnu Singh was driving a Maruti Gypsy. Third in this category was Jagmeet Gill of Chandigarh with navigator Chandra Sekhar. Gill was also driving a Maruti Gypsy.

The 4th Mughal Rally traversed the difficult, less-travelled stretches of Jammu and Kashmir including the Gool Gulabgarh-Reasi-Ramban stretch and the difficult hill climb from Daksum to Sinthan Pass. India’s first competitive hill climb event was made even more challenging by adverse weather conditions both days. Day One was marked by landslide and rockfall on the competitive stretch near Pir Ki Gali, the highest point on The Mughal Road. On Day Two, rallyists had to put up with terrible rain and storm for almost four hours in the competitive stretches.

The two hill climbs in The Mughal Rally this year were the competitive stretches up to Pir Ki Gali and Sinthan Pass. Pir Ki Gali is the highest point on The Mughal Road, at an altitude of 11,500 feet (4,100 meters) approximately. Sinthan Pass, at an altitude of 12,450 feet (3,748 meters) approximately, is on national highway 1B, connecting Kishtwar and Anantnag. Even during the height of summer, the hill climb to Sinthan Pass is lined with walls of snow. The pass only opens for traffic from April to September.