Rohtak (Haryana): Having strongly raised their voices for amending the Hindu Marriage Act to ban marriages within the same gotra and same village, Haryana’s khap panchayats have now decided to launch a campaign to get liquor vends shut in religious towns across the state. 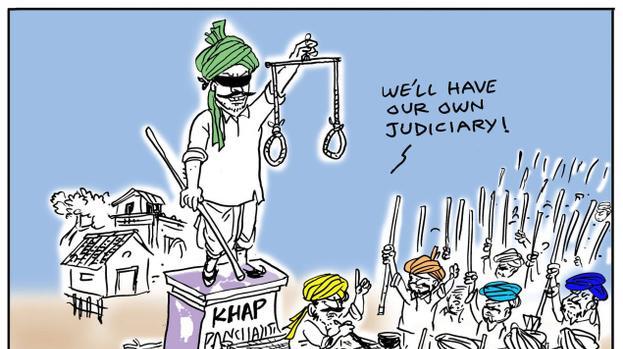 The khaps – who constitute a socio-political grouping in Haryana – say that liquor shops located in religious towns not only hurt the sentiments of local residents but also of devotees who come from far-flung places toffer prayers. A decision to this effect was taken at a meeting of office-bearers of around 20 khaps in Jhajjar town, 60 km from New Delhi, a senior khap leader said here.

The meeting was attended by representatives of the Ahlawat, Dalal, Jakhar, Dhankhad, Birhod 12, Bahu 17, Khuddan, Chahar, Kinha, Kadian and Jhajjar 360 khaps, the Haryana Dhankhar Sabha and others.

Besides khaps, activists of the National Human Rights Front, delegates of the Akhil Bhartiya Jat Aarakshan Sangharsh Samiti and some other NGOs also attended the meeting. There were also discussions on issues like huge expenses on weddings; increased drinking, especially among youth; female foeticide, the dowry system and drug addiction.

“We have unanimously passed a resolution to launch a special drive to get the liquor vends closed within the municipul limits of all religious towns in Haryana to maintain their dignity besides making sincere efforts to keeping the people away from drugs and liquor use,” Haryana Dhankar Sabha chief Om Prakash Dhankhar told.

He said that liquor shops being run in the religious towns, mainly located in the Kurukshetra, Panchkula, Yamunanagar, Panipat and Gurgaon districts, are playing havoc with the spiritual feelings of the devotees.

He said that a delegation of various khaps would soon meet Haryana Chief Minister Bhupinder Singh Hooda to demand the closure of all liquor shops in religious towns.

“We have also decided to launch a special campaign to mobilise the people in support of our demand. The campaign will be launched from Beri (a religious town in Jhajjar district where the ancient temple of Mata Bhimeshwari Devi is located)” Dhankhar said.

Other khaps in the state would also be contacted for their support on the issue so that the demand could be raised at state level in an appropriate manner.