Beijing: A large palace complex has been discovered inside the tomb of China’s first feudal emperor at the site made world-famous by the 1974 discovery of the terracotta warriors in funeral pits. 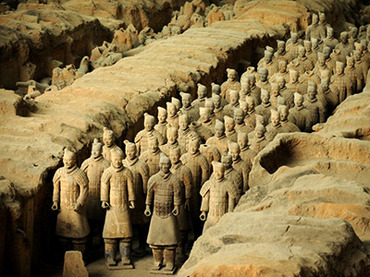 The site is located in Xi’an, capital of Shaanxi province.

A researcher told Xinhua, a palace of Qin Shihuang (259-210 B.C.) comprised 10 courtyard houses and a main building with a total area about one-fourth the size of the Forbidden City in Beijing.

Sun Weigang from the Shaanxi provincial Institute of Archaeology said archaeologists working since 2010 found that the palace inside the tomb was 690 metres long and 250 metres wide, with a total area of 170,000 square metres.

Bricks and pottery pieces have also been found.

The ancient complex had a central axis and a main building, a layout in accordance with traditional Chinese culture.

Emperor Qin Shihuang planned the construction of his cemetery soon after he was enthroned, and the large cemetery and mausoleum showed that he wanted to continue his imperial life after death.

The emperor attained the throne at age 13 and took over the affairs of the state at 22.

By 211 B.C., he annexed six rival principalities and established the first feudal empire in Chinese history.

The discovery of the terracotta warriors four decades ago made the site a hot tourist destination, visited by millions of people every year.

The Unesco declared it a World Heritage Site in 1987. Archaeologists believe as many as 6,000 clay soldiers stand in the largest of three pits at the site, which continues to be excavated.