Patna: Fed up with assurances that have made little difference, residents of Motihari town in Bihar, birthplace of legendary British author George Orwell, have gone online seeking support for the conservation of the house the author was born in.

“In a bid to mobilise support for the conservation of the birthplace of George Orwell, we have launched a new initiative online to inform people and offer those interested a platform to know more about the ground reality,” Debapriya Mukherjee, a senior Rotarian in Motihari, said. 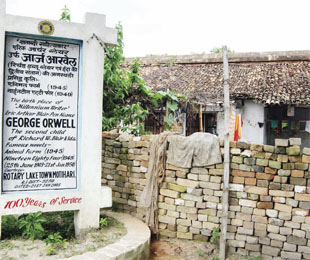 Mukherjee said that Rotary Motihari Lake Town has launched a website on the birthplace of George Orwell.

“It is the first of its kind to help conserve George Orwell’s birthplace,” he said.

After being neglected for decades, the website may aid efforts to conserve George Orwell’s birthplace, Mukherjee said.

According to him, the ancestral house of George Orwell now lies dilapidated, and stray cattle graze in its premises.

Another local resident, Somnath Singh said that it was unfortunate that despite the Bihar government’s declaration of the house as a protected site a few years ago, nothing had changed.

“The house is in poor shape. It may collapse if not renovated,” Singh said.

Earlier this year, the state government announced that it would prepare a blueprint to turn the crumbling single-storey house in East Champaran’s Motihari town, about 300 km from here, into a museum.

Orwell is the cult author of classics such as “Animal Farm” and “1984”, which painted a grim ‘Orwellian’ picture of a future totalitarian society where ‘big brother’ was always watching.

Successive governments have done little to capitalise on the tourism potential of house in which the author was born.

Two years ago, the state government had issued a notification declaring the building a protected site. The notification for its protection had been issued under the provisions of the Ancient Monuments (Protection) Act, 1976.

According to district officials, Orwell’s birthplace was mainly targeted by encroachers, who have been damaging it.

Orwell was born Eric Arthur Blair in 1903 at Motihari near India’s border with Nepal. His father, Richard Blair, worked as an agent of the opium department of the Indian Civil Service during British rule.

The house has been lying neglected for decades, and now serves as a shelter for stray animals and vagabonds. A small portion was taken over by the state government, and a schoolteacher now lives there.

It has been reported time and again that the roof line has caved in, and a large grapefruit tree has undermined the southern wall.

Only the stone floor looks solid, though it cracked during an earthquake that almost levelled Motihari in 1934.

At present, there is nothing to tell visitors that this modest two-room house was where Orwell spent the first few months of his life, tended to by his mother, Ida, and an Indian maid.

Orwell and his mother left for Britain soon afterwards.