New Delhi: In a setback to Samajwadi Party (SP) leader Mulayam Singh Yadav and Uttar Pradesh Chief Minister Akhilesh Yadav, the Supreme Court today declined to recall its earlier order of directing a CBI probe into the allegation of their possessing assets disproportionate to their known sources of income. 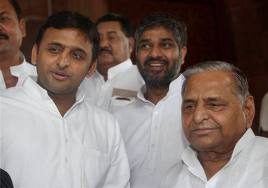 An apex court bench of Chief Justice Altmas Kabir and Justice H.L. Dattu, while pronouncing their judgement on Mulayam Singh’s plea seeking review of the court’s 2007 verdict directing CBI to carry out preliminary inquiry into the allegations of their possessing disproportionate assets, said that investigating agency will act independently without taking any instructions from government.

Pronouncing the judgement, Chief Justice Kabir said that the investigating agency will not submit its report of its investigations to the central government.

However, in a breather for Mulayam’s daughter-in-law, Dimple Yadav, the court dropped the probe against her.

Earlier on a petition by one Vishwanath Chaturvedi, the court in March 2007 had directed the CBI to carry out a preliminary inquiry against the SP chief, his sons Akhilesh Yadav and Prateek Yadav, and Dimple Yadav into the allegations of possessing disproportionate assets.