Beijing: China was “forced into a counterattack” in the 1962 war with India, said a state-run Chinese daily, blaming New Delhi for initiating “a forward policy of sending troops and border patrols into disputed areas”. 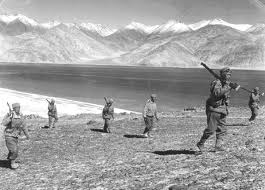 An opinion piece today in the Global Times titled “India still conserves frontier mentality over 1962 border war with China” said that in recent months, India has taken a high-octane stance in commemorating the 50th anniversary of the China-India Border War.

“In disputes and conflicts between two countries, we shouldn’t purely place the blame on one side. Even if one side does bear the main responsibility, we should make an overall reflection,” wrote Liu Zongyi, a research fellow of the Center for South Asia Studies at the Shanghai Institutes for International Studies.

The article said that divergences on the McMahon Line between China and India were the fundamental reason for the border war.

“The McMahon Line was forcibly imposed on China and India by the British Empire, since China’s former Qing Dynasty (1644-1911) and India’s old Mughal Dynasty (1526-1707) had their frontiers defined by a traditional line instead of a `boundary’ in the modern sense. US former secretary of state Henry Kissinger pointed out it is in essence `the interpretation of colonial history’.”

The article said that India supported the Dalai Lama’s uprising.

“After India provided shelter for the Dalai Lama in exile in 1959, China had to handle the boundary issue with India from a strategic perspective. But the Chinese government has always been in favour of solving the issue through negotiations.

“China’s then premier Zhou Enlai flew to New Delhi in April 1960 to negotiate the border issue with then Indian prime minister Jawaharlal Nehru, but he refused negotiations. The attitude of Nehru was surely influenced by India’s domestic politics: Nehru and his ruling party were attacked on the border issue by opposition parties,” it said.

The daily went on to say that that China was “forced into a counterattack in the 1962 war was not only believed by regional specialists but also by strategists like Kissinger”.

“After the first military clash between China and India in the border area in 1959, the Chinese military was ordered to retreat 20 km to avoid an escalation of the conflict. This came while India initiated a forward policy of sending troops and border patrols into disputed areas,” it said.

The article stressed that since China’s policy to stop India’s “further encroachment failed, a lightning strike to force India to the negotiating table was the last resort”.

Describing it as a “passive counterattack”, it said that it was aimed at ending the harassments from Indian troops and bilateral confrontation.

“The war was detrimental to both India and China. Even though China did make India negotiate, India since then has taken China as its biggest threat and taken a militaristic stance. China not only failed to get back its lost territory but created a new rival. This was unexpected,” the daily admitted.

The Chinese leadership has repeatedly emphasized that China and India will never be at war again. “If the border problem cannot be solved, it could be temporarily put aside.”

Calling for the two countries to view the issue objectively, it said that India’s high-profile memorial for the 50th anniversary of the border war seems its military leaders and strategists are not doing so.

“Their reflection is allegedly confined to their country’s military weaknesses, such as outdated equipment, misconduct, and poor logistics. If they continue deliberately ignoring the fundamental reason that caused the war, the China-India border problem will never be solved,” it added.