Srinagar: For nearly 37 years, Jammu and Kashmir’s regional National Conference (NC) has been criticizing the central government for not implementing the terms of the 1975 Indira-Abdullah accord. All of a sudden, some elements of the NC leadership now say there was no accord. 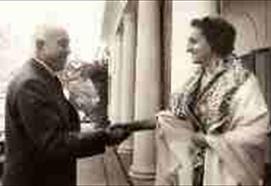 After 22 years of estrangement from mainstream politics, the NC founder, the late Sheikh Muhammad Abdullah, assumed power in Jammu and Kashmir in 1975 following the signing of the accord by his emissary, Mirza Afzal Beg, and then prime minister Indira Gandhi’s emissary, G. Parthasarthy.

The terms of the accord included renaming the chief minister as the Wazir-e-Azam and the governor as Sadr-e-Riyasat, the nomenclature in vogue before the Sheikh’s arrest in 1953. The accord also said central laws extended to Jammu and Kashmir after 1953 would be reviewed and would be revoked in case they impeded the state’s special status.

Sheikh Nazir, NC general secretary and nephew of the party’s founder, now says the late Sheikh had not signed the 1975 accord at all.

In an interview to Greater Kashmir, a prominent local newspaper, Sheikh Nazir replying to a question said: “Before levelling allegations against the Sheikh, people should read history and check the facts. The 1975 accord doesn’t have the signature of Sheikh Sahib; neither was it tabled in the state legislature”.

Not many among the younger generation of Kashmiris would know that the Sheikh had become chief minister of the state with Congress support after the 1975 accord although his party did not have a single legislator in the state assembly at that time.

“The accord was signed by the two emissaries and the Sheikh came to power after the accord was endorsed by him. Saying that Sheikh had not signed or endorsed the accord is trying to negate history. How did Sheikh assume the reins of power after remaining out of mainstream politics for 22 years after his arrest in 1953,” asked M.L. Kak, a senior Kashmiri journalist who lives in Delhi. Kak has extensively reported Kashmir politics for over five decades.

Mehboob Beg, an NC member of parliament and son of the late Mirza Afzal Beg, responded to the controversy by saying: “It will be wrong to say that accord happened between Mirza Afzal Beg and G. Parthasarthy.”

“Mirza Afzal Beg could not go to meet Parthasarthy himself, Sheikh and Indira Gandhi were part of it. I don’t know in what context Sheikh Nazir said so, but the fact remains that Mirza Afzal Beg was merely a representative of Sheikh when the accord was signed,” Beg added.

What baffles observers here is why after 37 long years a controversy is being raked up about whether or not Sheikh signed the accord.

“The terms of the 1975 accord were never fulfilled after the Sheikh came to power. To wriggle out of its responsibility to have the terms of the accord fulfilled, the NC could now be saying there was no accord at all”, Kak argued.