Mumbai: Actor Salman Khan, who is on a promotional spree for his forthcoming movie “Dabangg 2”, says the third instalment of the franchise will be a prequel to the first film. 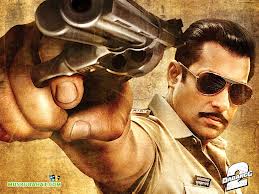 “We have our third film ready and it will go back and show how Chulbul Pandey becomes Chulbul Pandey. If the second one becomes a hit, we can go to the third one, which is actually the first one. So ‘Dabangg 3’ will be a prequel,” said Salman, who plays a corrupt, but kind-hearted cop in the movie.

“Dabangg”, released in 2012, was directed by Abhinav Kashyap. It featured Salman and then debutant Sonakshi Sinha in the lead.

Asked if she will be seen in the prequel, he said: “There is a place for Sonakshi in ‘Dabangg 3’ as well. She is there, her father is there, but we don’t meet.”

For now, Salman is looking forward to “Dabangg 2”, which has been produced as well as directed by his younger brother Arbaaz. The film, featuring Prakash Raj as the villain, releases Dec 21.