Toronto: Canadian researchers have identified a key molecule that controls a scissor-like protein responsible for sprouting of plaques — the telltale sign of Alzheimer’s disease. 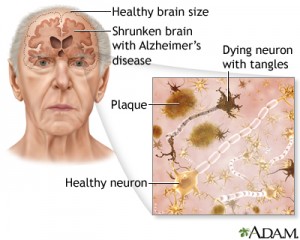 Using an animal model, Weihong Song, professor of psychiatry at the University of British Columbia (UBC), found that disabling GSK3-beta’s effect in mice resulted in less BACE1 and far fewer deposits of amyloid in their brains.

Such mice performed better than untreated mice on memory tests, the Journal of Clinical Investigation reports.

Previous research had shown that GSK3-beta spurred the growth of twisted fibres inside neurons, known as tangles — another hallmark of AD. Song says his discovery of the protein’s dual destructiveness makes it a promising target for drug research, according to a UBC statement.

GSK3-beta, however, is a versatile enzyme that controls many vital physiological functions. The drug used to inhibit GSK3-beta in the mice is too indiscriminate, and could cause several serious side effects, including cancer.

“If we can find a way to stop GSK3-beta’s specific reaction with BACE1, and still leave it intact to perform other crucial tasks, we have a much better chance of treating AD and preventing its progression,” says Song.