Waknaghat (Himachal Pradesh): Fast paced developments unfolding in the computing world that have wide applications for human health, mass transport systems, education, data collection, mobile connectivity, cloud computing, networking, e-governance and others are all part of the 2nd International conference on Parallel, Distributed and Grid Computing that has drawn participants from as many as 23 countries.

Speaking at the inaugural function of the conference being hosted by Jaypee University of Information Technology (JUIT), Zurich based computer science expert Peter Widmayer said not just in Switzerland but transport congestion was becoming a problem around the globe and it was challenge to develop applications that could regulate it efficiently. 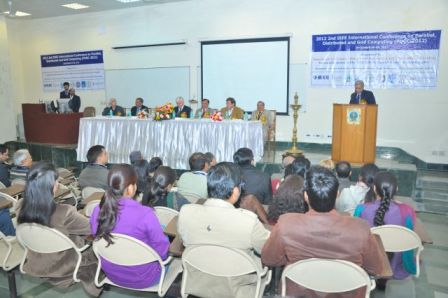 A paper by Deepshikha Goyal, Jai Bhaskar and Parvinder Singh from the central university of Rajasthan spells out a model of a low model patient monitoring device that can measure temperature, blood pressure and pulse rate of patients and transmit this data and generate an alert message, if there is a critical situation.

Another paper by Xiao Ma, Yong Cui and Lian Wang from Tsinghua University, Beijing discusses the emergence of mobile cloud computing that provides an opportunity to save processing energy through the way of offloading computation tasks to remote servers.

A paper by Piyush Swami (National Institute of Technology, Rourkela), Ramandeep Singh (Massachusetts Institute of Technology Cambridge, USA) and Sneh Anand (IIT Delhi) spelt out ways for a human-computer interface for a simple yet novel system that utilizes electro signals to provide for rehabilitation to people with severe disability, especially those suffering from  various neural disorders.

A paper by Prashant K Gupta from GGSIP University Delhi, has presented a technical design for a mobile examination system along with the work flow between various modules of the system. Mobile examination is a technique of conducting examinations without the use of pen and paper as the student can take the examination through mobile devices.

The conference received a record 606 research papers, many of them from prestigious universities, and the reviewers zeroed down on 195 that are to be presented over three days,” said Ravi Prakash, vice-chancellor of JUIT.