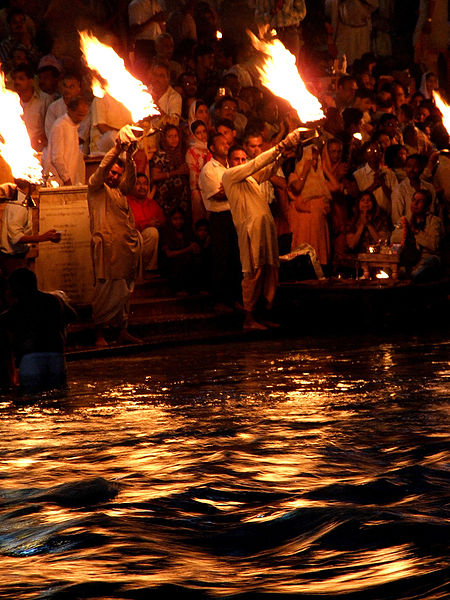 Dehra Dun: They come from affluent families in Ludhiana, Punjab.  Both Amandeep and Seema Khanna could have been attired in the best of bridal wear and had wedding ceremony that would have been an envy of many an eye. But both got wedded wearing track suits, with brooms in hand on the Har-ki-Pauri, Hardwar in Uttarakhand.

Perhaps the solace for them was the fact the Ganga, considered to the holiest of holy rivers in the country, was there as witness and would have given them her choicest blessings. There was no marriage party as such but thousands of broom wielding volunteers of Sirsa-based Dera Sacha Sauda clapped joyfully as the couple put the ‘var-mala’ (garland) round each other’s neck.

The crowds were bigger than they are at the occasion of the festive Kumbh Mela, when lakhs converge at the Har-ki-Pauri for a dip in the Ganga. Their clapping resonated in the most auspicious nothing ghat as the two embraced each other as husband and wives. But the occasion was short-lived, as dutifully, they joined the other volunteers in cleaning that ghats and the river.

Amandeep and Seema’s marriage was fixed for Nov 1 and the families of both had planned a marriage that would be the talk of the town with the normal glitz and gala that is associated with marriages in Punjab. But then came information that Dera Sacha Sauda chief had decided to clean Ganga from Rishikesh to Roorkee and followers should volunteer for the cause.

Being ardent followers of the sect, the two gave up the gala programmes that had been planned for their wedding and decided that they would share the ‘var-mala’ (garlands) at Har-ki-Pauri while participating in the cleansing programme. The other volunteers on the occasion would be the guests and frugal meal at the ‘langar’ (community eating), would be their wedding feast.

There were no traditional wedding vows, no ‘pheras’ round the sacred fire and no signing of registers. The two with broom in hand along with other volunteers, awaited the arrival of Sant Guru Gurmeet Ram Rahim Singh and exchanged the ‘var-nmala’ (garlands). The Guru later declared them husband and wife, and they joined the other volunteers in cleaning the Har-ki-Pauri.

Reacting to the wedding the groom, Amandeep said that that whatever the family is, because of the blessings of the Guru and as such his call for volunteering to clean Ganga could not be ignored and as such we decided to get married here. “What could be a better than getting married in the presence of lakhs of volunteers”, he added.

His wife Seema was also very happy saying that that it is very rarely that such a marriage is solemnized in the presence of lakhs of well-wishers who have become witness to the marriage. Rather than going on a honeymoon we picked up brooms for social service, what could be a better tradition to set for others, she claimed.