Shimla: Congress would elect its chief ministerial candidate in a democratic manner after the polls by holding a legislature party meeting that would be approved by party president Sonia Gandhi, former Punjab chief minister Cpt. Amarinder Singh stated here as he rubbished reports about the party having declared its nominee ahead of the polls. 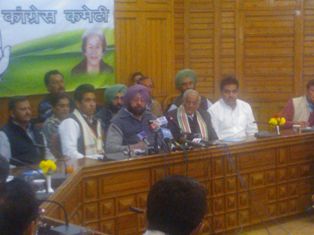 It was kind of party president Sonia Gandhi to have named him as the chief minister candidate ahead of Punjab elections but the party procedure was to hold a Congress Legislature Party (CLP) meeting for electing the leader that was approved by the party president,” he said.

Speaking to reporters’ hours before election campaigning ends in the state, the senior Congress leader from Punjab said that BJP like in Punjab had led a very corrupt government in Himachal as 7 out of 11 cabinet ministers were facing corruption charges and 21 of the 43 MLAs had criminal cases pending against them.

For the past five years it has been a mafia government that the hapless people of Himachal have been forced to bear under BJP in the hill state. The ministers and other BJP leaders have been more interested in amassing wealth through corrupt means and had shown no concern for the common man, he added.

Pointing out the road conditions in Himachal, he said that development had come to a standstill in the hill state as rising rate of fatalities reflected both the bad conditions and the bad conditions of public transport. Roads have become death traps as there have been over 3000 deaths due to road accidents, said Amarinder.

Making a comparison with Punjab, he said that the finances of Himachal too were in a precarious condition and the state was unable to implement an enhanced pay commission recommendation for its employees; something which a Congress government would do when it assumes office.

“Corruption charges levelled against Virbhadra Singh during an election campaign was typical of BJP by resorting to character assassination and political vendetta for a few votes. Playing upon reputations built over lifespan in politics spoke of the low morality that ruling party in the state was stooping to in its quest for retaining power,” he said.

Double speak of BJP was best demonstrated by its stand on FDI in retail, said Amarinder. In the NDA government the cabinet had approved the move but when UPA government does so, BJP is opposed to it, he said.

He said that FDI in retail would benefit farmers of both Punjab and Himachal by buying farm produce at higher rates and consumers would get them at lower rates.

About the Himachal government having handed out land donated for a children’s home in a Solan valley to a business associate of Baba Ramdev for a token amount of Re 1/-, the royal scion of Patiala house said, our family had given the land for a noble cause of having a children’s home but the BJP government has handed the prime land to Baba Ramdev’s enterprises for free, who otherwise could afford to buy it as they run an Rs 1000 crore business empire.

Condemning the terrorist attack in London of General Brar, the former chief minister said that one of the reasons for inciting terrorism was raising memorials like the one being constructed in the Golden Temple complex.