Shimla: Tax exempted donations to Congress party made solely for the purpose of carrying out political activities having been misused for commercial purpose is in gross violation of law and the tax exemption permitted to the party should be revoked, senior BJP leader Arun Jaitley stated here today. 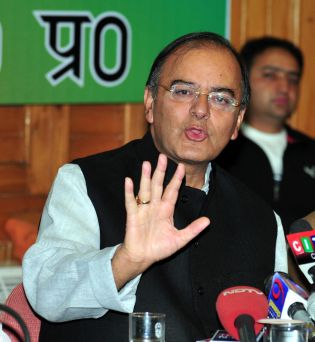 Jaitley told reporters here that one document made public by Subramaniam Swamy yesterday, corroborated with one listed on the Registrar of Companies website and showed that AICC had made a Rs 90 crore loan to Associated Journals Pvt Ltd.

Under law, all political donations are exempted from taxes both for the donor and the receiving party solely because such funds are to be used for public purpose of carrying out political activities and nothing else, emphasized Jaitley.

He said that Congress needed to respond to Swamy’s allegations but it was the first case in the country where a political party had used donated funds for commercial purposes.

Demanding that all tax exemptions granted to Congress party must go, the senior BJP leader said that the case should be investigated by Central Board of Direct Taxes (CBDT). .

Swamy has alleged that Sonia Gandhi and Rahul Gandhi own 76 percent of Young Indians, a company incorporated in November 2010 that acquired Associated Journals which was founded by Jawahar Lal Nehru in 1938 for publishing newspapers. National Herald was one such publication which closed down in 2008.

Besides the Gandhis’ who hold 38 percent equity each in the company, the Young Indian board also has Motilal Vora, Oscar Fernandes and Sam Pitroda on it.

Swamy who is chief of Janta Party has demanded a CBI inquiry into into the whole case while both Rahaul Gandhi and Sam Pitroda have threatened to take legal action against Swamy for the allegations made.

Speaking about the election campaign in Himachal that concluded today, Jaitley who is also leader of the opposition in the Rajya Sabha, said that anti-people policies of the central government, price rise and corruption were the main issues  that confronted the common man today.

In the name of reforms, prices of diesel, first making a steep hike in cooking gas prices and then curtailing the number of subsidized cylinders permitted per household and FDI in retail have been implemented in the country, he said.

High diesel prices have affected farmers, FDI in retail would hurt the retail sector in the country and restrictions as well price increase in LPG had impacted each household. A political price would have to be paid for these anti people measures that are being sold as reforms.

The BJP leader claimed that there was anger against the UPA government in Himachal for these measures and there was a level of satisfaction with the state governments functioning which would translate into BJP returning to power in the November 4 polls.