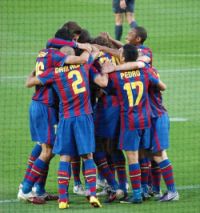 Unai Emery’s team are bottom of Group G and need a victory to have any realistic hope of qualifying for the knockout stage.

Barcelona scraped past Spartak 3-2 in their September opener in Camp Nou, coming back from 1-2 down in the last 20 minutes.

Pedro recalled how close the Russians came to a shock win.

“Spartak are a very good side. Particularly in how well organised they are, the fast counter-attacks and the great players who have big potential. I won’t hide it, they’re dangerous opponents,” Pedro said.

Barcelona top the group on nine points and can seal qualification with a win in Moscow.

“Especially bearing in mind Spartak still have the chance to go higher in the group, this game won’t be easy for us at all.”

Like all teams coming to play Spartak, Barcelona will be uneasy on the the plastic pitch of Luzhniki Stadium and must also cope with potentially freezing conditions, Pedro said.

“Yeah, we’re not used to playing on artificial pitches and the sub-zero temperatures will also be a test for us.”

The 25-year-old is the product of the Barcelona academy and has scored 59 goals in 183 appearances. He also has 23 caps and nine goals for Spain.