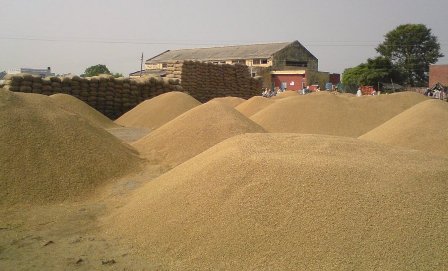 Chandigarh: Beating the drought this year which saw 42 percent deficient rainfall in the state, Punjab has made a record procurement of 127 lakh tonnes of paddy, a government spokesman stated here today.

Out of the total procurement, nearly 99.9 percent paddy procurement has been done by government agencies.

In Punjab, Ludhiana, Sangrur and Patiala led in procurement.

In neighbouring Haryana, over 45 lakh tonnes of paddy has been procured this year. This is much higher than the over 37 lakh tonnes procured last year.

Kurukshetra, Karnal and Kaithal led in paddy procurement in Haryana.

Procurement of paddy in both states started Oct 1 but the bulk of the stocks started arriving only after Oct 10. The minimum support price (MSP) fixed by the government this time is Rs.1,250 and Rs.1,280 per quintal for common and grade-A varieties of paddy.