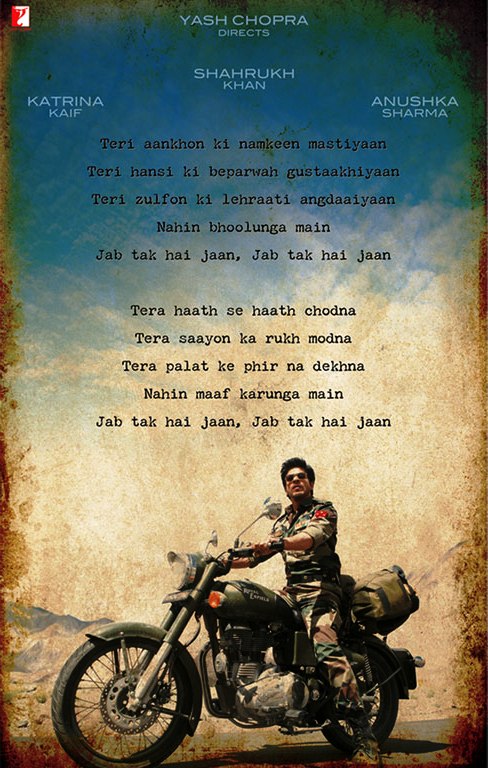 Flawed but fabulous, the pasha of romance Yash Chopra’s swan song — may god rest his rhapsodic soul — is a swoon-worthy ode to that achy-breaky feeling called love. Reams of poetry and volumes of prose have been writttn on it. But no poet no author has come close to unraveling the mystery of the heart.

Yash Chopra spent most of his adult years peering passionately into the heart. “Jab Tak Hai Jaan” (JTHJ) is not his best work. The last 35 minutes when Shah Rukh Khan loses his memory is best forgotten. Miraculously the entire end-piece of this fractured symphony co-written by Aditya Chopra and Devita Bhagat, doesn’t take away from the sublime beauty of the work.

JTHJ is like an elaborate work of art that offers many different kinds of guilty pleasures for all those diehard fans of Yash Chopra’s romance who grew up, grew wise and even grew old watching “Daag”, “Silsila”, “Chandni” and the doyen’s best work, “Lamhe”.

His latest and sadly his last work could keep you enthralled trying to play the game of spot-the-earlier-Yash-Chopra-referenced. You will catch “Daag” in the way Katrika Kaif returns into Shah Rukh Khan’s fractured life. You can catch many shades of Karisma Kapoor from “Dil To Pagal Hai” in Anushka Sharma’s girl-madly-in-unrequited-love act. You will see “Kabhi Kabhie” in the way Katrina comes to search for her fugitive mother (played by Neetu Singh, who had played the girl in search of mom in “Kabhi Kabhie”) and you can spot “Silsila” in Katrina’s scenes with Anushka in London.

Both the ladies are madly in love with the same man, much the way Sharmila Tagore and Raakhee loved Rajesh Khanna in Yash Chopra’s “Daag”. Indeed, there are perceptible shades of Rajesh Khanna’s poetic romanticism from “Daag” in Shah Rukh’s loner death-defying soldier’s character.

Shah Rukh imbues the part of solider Samar with a great deal of heart. Never since Sanjay Leela Bhansali’s “Devdas” has he expressed the pain of lost love so eloquently. That his lady love happens to be Katrina Kaif helps us in sharing his pain. Yup, it’s possible to fall hard in love with this tragic beauty of elaborate elegance and spend the rest of one’s life pining for her.

Luckily fate and the scripwriters plan a happy ending for the soldier love story. But not 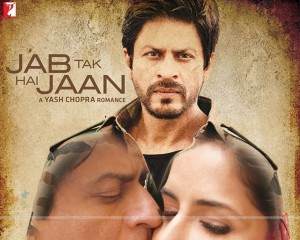 before a sassy spunky bindaas photo-journalist Akira(Anushka Sharma) sweeps into the traumatized Samar’s life. The Shah Rukh-Anushka sequences in the second-half shot in the stunning Ladakh and Kashmir valleys blends the war-time urgency of army life with a seminal spot of sunshine. It’s a pleasing blend of the valorous and the romantic that turns the Shah Rukh-Anushka chemistry from “Rab Ne Bana Di Jodi” on its head. There he craved for her attention. Now it’s her turn.

Comeuppance, anyone? Fate, as imagined in “JTHJ” is a flimsy mistress, hard to please and very high-maintenance. Katrina’s Meera is a bit of a silly romantic masquerading as an in-charge woman entrepreneur.She makes ludicrous deals with god and pays heavily for her trade practices with an unequal partner (god). Meera is a woman of today captivated by outdated beliefs.

In some ways this exquisitely mounted work of art belongs to Katrina. She owns Meera’s role in the way Sridevi and Raakhee owned “Chandni” and “Kabhi Kabhie”, respectively. Shot in pristine colours by cinematographer Anil Mehta whose camera evidently loves Katrina’s face as much as Samar, Katrina emerges as an actress who feels her character’s pain in anguished close-ups.

Yup, Yash Chopra couldn’t have chosen better. All the three protagonists seem assembly-built for their characters. And they are never short of support from every department of film’s making.

It’s the script that intermittently turns villain showering unexpected blows on the tender romance that the director so meticulously carves out of the lead pair’s unflinching commitment to delineating the doomed dimensions of an ill-fated love that finally conquers even fate.

While we applaud the film’s visual and emotional velocity Meera’s dumb deals with god are plainly not the stuff great love stories are made of. And yet, we can’t help cheer for the lovers when they finally embrace in strife-torn militant Kashmir. Devdas had it easier. His explosive mine-fields were only in his mind.

And he could’ve never imagined his Chandramukhi would ever be as persistent as Anushka Sharma.

“Kya karoon, ishq ho gaya hay tere se,” she blurts out in a tragic confession of one-sided love. Ah, love! What a fall it causes even for the cynics. We don’t quite fall in love with the film the way Akira falls for Samar. But we come close.

“JTHJ” is an ambrosial autumn sonata done in colours and moods that redefine Yash Chopra’s legendary levels of aesthetics while sharpening and polishing the contours of his characteristic preoccupations. There is the elusive search for love and of course the unattainable beauty played by Katrina who miraculously manages to take her character beyond her porcelain features. When she dances in an underground London pub she forgets the world around her is watching. Then there is Shah Rukh Khan standing tall as a soldier who defuses bombs but can’t seem to defuse the love catastrophe in his life.

“Jab Tak Hai Jaan” makes you fall in love with love all over again.

We will miss you, Yashji.