Pune:Reserve Bank of India (RBI) Governor Duvvuri Subbarao Friday virtually ruled out an early rate cut, saying inflation is still “quite high” and the central bank is on a high alert.

“At 7.45 percent, inflation is certainly quite high,” Subbarao told reporters on the sidelines of an event here. 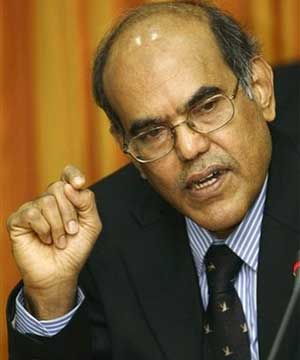 The central bank has kept the key policy rates steady since lowering it by 0.50 percent in April review.
Industry lobbies as well as the government have been asking the central bank to cut rates in order to stimulate the sluggish economic growth, which has fallen to nearly a decade low.
In the second quarter review of monetary policy for 2012-13 announced Oct 30, the RBI lowered the cash reserve ratio (CRR) by 0.25 percent, but kept repo and reverse repo rates, which determine lending and borrowing rates by the commercial banks unchanged. The tight monetary policy has dampened business sentiments and Finance Minister P. Chidambaram has expressed his unhappiness over this.