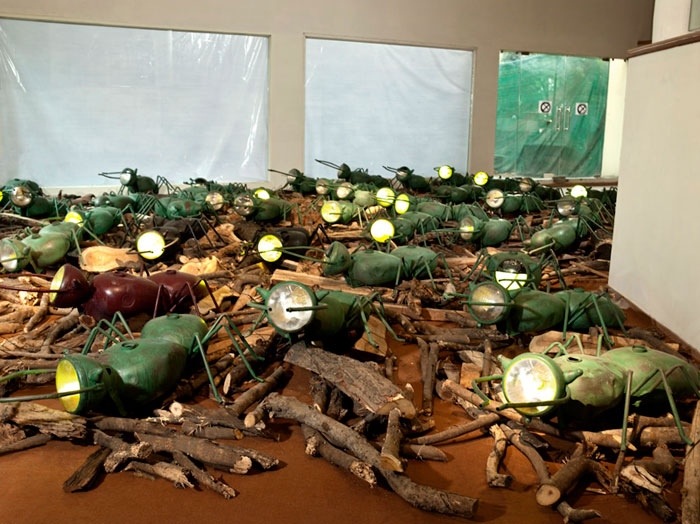 New Delhi: For leading multi-media contemporary artist Paresh Maity, a globalised painter with an eye for diversity of Indian life, “identity is very important for any form of art to flourish”.

“I can be removed from my own heritage, but I cannot lose touch with it. Proper globalisation of Indian art is possible only when heritage meets modernity. If there is no root, you are baseless,” said Maity.

The waterscapes of riverine Bengal, the golden light of the Thar and the cosmopolitan colours of the bustling capital, have all come together on the canvas of Maity, who will be honoured with the prestigious Dayawati Modi Award for Art, Culture and Education-2012, in the capital Monday.

The artist says his journey from Midnapore to Kolkata and then to Delhi, Rajasthan and around the world in the last two decades has changed his colour palette, formats of creative expression and returned him closer to his roots as an idol artisan in a strange way.

Maity is known for his cutting-edge mechanical western-style installations, bronze sculptures and giant paintings of more than seven feet.

“It is always better to know your roots and build your artistic dimensions around it,” the artist said about the essence of global Indian art.

“You can have a different language, but the content of your art must be from your culture,” he said.

The 47-year-old artist is making a 12-foot installation of the seven cities of Delhi for the India Art Summit 2013.

“The installation is six feet in diameter. It portrays how the metropolis of Delhi have evolved over the centuries; how the ancient Tughlaqabad was like and it is now. I am using day-to-day material and lot of colours,” Maity said.

The next year will see Maity reconnect to his core oeuvre of water colour once again at the World Art Fair at the Marina Bay Sands in Singapore spread across 1,000 sq feet.

“The water colours will be large – some almost 7 X 10 sq ft in size. They will be impressions of the places I have visited in the last 20 years. It is difficult to tackle water colour on large surfaces,” Maity said.

An installation of small boats will lend solidity to the minimal landscapes in water colour, he said.

Maity, who began as a landscape painter in Bengal, took to the world the muted colours of the river banks with their silent meditative quality of life. There were no figures in his early landscapes – boats, jetties and laden skies lived in perfect harmony with his dark indigo, green, ochre and cobalt spaces.

“When I migrated to Delhi in 1990, I put the city on to my canvas. My art changed after I went to Rajasthan for the first time, figures started appearing in my paintings. The landscape became more colourful with a riot of yellow, gold, orange, red and green. Rajasthan is bathed in a golden light in winter,” Maity said.

In Delhi, Maity’s passion for big surfaces has grown over the years. “Initially, I did not have papers, I joined the papers and made bigger water colours,” he said.

The artist returned to sculpting six years ago. One of his new age installations that made news around the world was an abstract concept, “Procession of 50 Ants”, made of 100 motorbike spares. It was exhibited at the Art Stage in Singapore in 2011.

“I broke down the machines (bikes) and re-assembled them to resemble large ants, nearly five feet in length.” Why ants? “They are very disciplined, very sensitive and intuitive. They live in small colonies and can sniff disasters,” Maity said.

The artist is experimenting with art photography as well.

“I am also planning to begin work on my third documentary about the places I have visited,” he said.

Maity will paint the Dalai Lama on the World Compassion Day in Mumbai Nov 28.