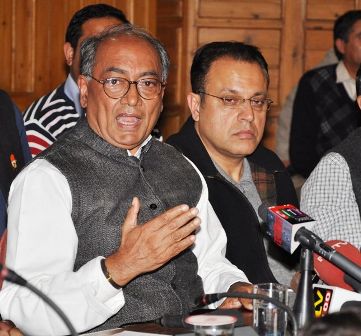 Speaking to reporters here he said the only difference with the Oscar Award winning film being that whereas one became a millionaire by winning a TV game show on the lines of Kaun Banega Crorepati, in Gadkaris companies the directors living in slums were millionaires on paper only and were yet to receive their riches.

At one end the outspoken congressman questioned the silence of anti-corruption activists Arvind Kejriwal, Anna Hazare and Prashant Bhushan, yoga guru Baba Ramdev and spiritual leader Sri Sri Ravi Shanker for going silent about functioning of Gadkari’s shell companies, however, at the same time refused to comment about the ‘conspiracy of silence’ over claims by Digvijay of holding documents about corruption issues against the kit and kin of former prime minister Atal Bihari Vajpayee  and former deputy prime minister LK Advani.

He said that he would not make public the documents held and did not indulge in such kind of politics.

“Prosecute me,” Digvijay brushed aside the question when pushed to come clean on the claim made.

In response to the claim, former chief justice of India JS Verma had termed it a ‘conspiracy of silence’ where the ruling party and the main opposition party were shielding relatives of top leaders from corruption charges that should be investigated.

The Congress leader said that the support Gadkari was getting from BJP and RSS showed their two faces on corruption, something which Congress has been fighting upfront and had enacted the RTI law for ensuring transparency in government functioning.

The track record of the earlier NDA government in checking corruption is well known. No case was registered against Bangaru Laxman or the MPs in the cash for question scam when caught on camera accepting cash. LK Advani, who is making much hue and cry about black money stashed abroad made no effort to unearth the claimed huge amount when he was the home minister of the country, he said.

Digvijay claimed that in Adarsh Housing Society, Mumbai there were at least 10 flats held under benami transactions by close associates of Gadkari and one of them was that of sitting BJP chief minister. When pressed the leader refused to name as to which chief minister it was.

Condemning Narinder Modi’s remarks against Shashi Tharoor wife as a insult to all womanhood, he said the Gujarat leader was silent about his marital status and had never responded to a video on Youtube about Yashoda Bhen, who had married Modi in 1968. “Tharoor is right to say that Modi does not know how to love,” said Digvijay.

Robert Vadra had rightly  invested in land at Manessar, where property prices immensely increased in a short span of time,” he said.

Congress was only defending Vadra, who is a private individual, because he was being targeted for being the son-in-law of party president Sonia Gandhi, he said.