A fractured parliament over permitting foreign direct investment (FDI) in retail has the entire opposition gunning for the government; allies are not sure about its political fallout whereas the Manmohan Singh government is firm on going ahead midst all the controversy surrounding it.

It was on 14 September 2012, that the union government cleared the proposal to allow 51 and 100 percent Foreign Direct Investment (FDI) in multi-brand and single-brand, respectively. 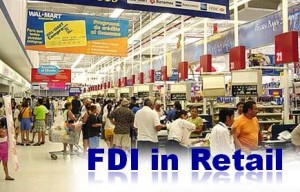 The government’s move gave a sudden lease of life to retails stocks that touched a new stressing that the government has allowed FDI in retail with proper regulations. Interests of of farmers and local kiryana shops in the country had been kept in mind he said.

Sector leaders saddled with big but sick retails chains were quick to support the government’s policy decision.  However, it was not without a political cost for the entire opposition and many of the allies were left fuming, complaining that they had not been taken on board before making the policy announcement. high in the stock markets after they had been lying low for many quarters.

FDI involves permitting capital inflows from abroad into the economy of a country which are used to increase production capacity, modernize the economy, generate employment and bring about monetary gains.

The inflow in form of FDI is the best source of investment as it is a long term investment and is debt free. The new FDI policy in retail allows global companies to take 51 per cent stake in Indian companies doing retail business here.

The congress led UPA government holds that FDI in retail could be a game changer to the economy whose benefits would be reaped over a long time.

Even the Atal Bihari Vajpayee led NDA government (1999-2004) HAD planned to introduce FDI in retails but fearing opposition, the policy decision put on the back burner, though the main opposition BJP now is in denial mode.

To take an impartial view it would be important to assess the status of Indian agriculture that despite 65 years of independence still remain underdeveloped. The prime reason is the poor logistic set up and limited market access for our farmers to sell their produce.

Advent of FDI in the retail sector will ensure that farmers get justified returns on their produce and wastage in perishable foods sector is reduced helping to curtail food inflation. Moreover, it will also help in proper sourcing of products throughout the country.

The investment through this route is expected to develop better supply chains, set up cold storages and induct advanced technology. With India being one of the largest producers of fruits and vegetables globally, the sector is expected to benefit the most.

Direct selling to the big retailers, under a contract program, is fetching better returns to the farmers as is gauged by what Bharti Walmart’s venture in Punjab. The farming community is said to be a satisfied lot.

FDI in retail has bought the communists and BJP and other opposition party’s on one platform terming it as a sellout to US multinationals. The governments argument that FDI in retail had been allowed only in 52 cities that had a population of over 10 lakhs and all states had could make their choice does not cut ice.

Once allowed in one part of the country, the products manufactured there would travel to all parts of the country. Moreover for a country like India, two sets of retail trade laws, for those who allow FDI and those who do not, will not prevail.

In the US economy where about 80 percent of retail is in the organized sector, the government steps in and hands out subsidy to its farmers under the Farm Bill for their sustenance, how do we expect FDI in retail would prove a boon to the India farm sector.

Though the argument that organized retail would weed out middleman is advanced to support the move but considering the findings in many countries that have allowed show that a new set of middle men emerge who act as quality control or certification agents.

Moreover, predatory pricing policy, rules the roost after big players set about their monopoly in the field, with time. Indian retail market is assessed at around 400 billion dollars in worth with there being about 40 billion people employed in the sector by about 12 million retailers.

On the other hand Wall-Mart, the biggest retailer in the world, generates 420 billion revenue and employs only 2 million people. Knowing very well that modern retailers are technology driven then how do we expect them to create new jobs and not prune the existing jobs.

The share of organized retail in India is only four percent and rest is all unorganized but is livelihood driven and not solely profit driven. FDI could snatch away livelihood means from many people.

Every new reform has its share of critics but in the case of India, it urgently needs FDI in retail if it wants to bring about efficiency in its production and distribution systems and remain a favoured investment destination globally.