Manali: Surrounding areas of Manali have received the first major snowfall of the season. The intense cold wave sweeping the region broke out into the first flakes falling last night that has accumulated to more than 4 to 6 inches at places.

Lower regions of Kullu have received widespread rains and the whole valley has been lashed by cold winds sweeping through. 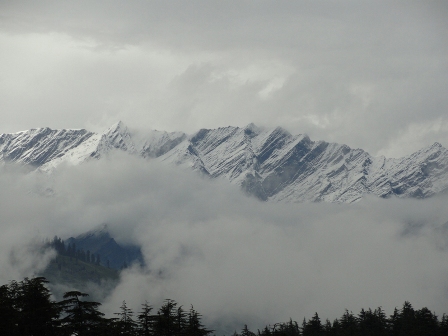 Rohtang Pass, the gateway to Lahaul Valley, has recorded more than 1 feet of snow and it there is about 4 to 6 inches of snow at Kothi and Solang Valley.

The snow has cut off all access for vehicular traffic to Lahaul and Spiti valley over Rohtang Pass. The pass is only expected to open by May-June, next year.

The snow on the one hand has been greeted by orchard owners in the valley and has brought cheers among the hotel owners, a business that is struggling this year.

The valley was experiencing a dry spell for over 2 months. Considered timely, the snowfall will help the orchardists to start their winter operations of adding manure to the soils and pruning of apple trees, in the hope of a good crop next year.