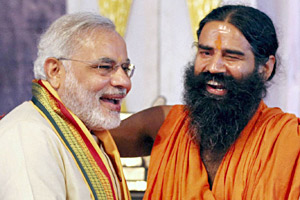 If those associated with the Patanjali Yogpeeth in Haridwar are to be believed, Modi has reached a tacit understanding with the yoga guru, which he hopes will counter the broadside attack of the Congress leaders and help him get a majority.

Baba Ramdev and his close confidante Acharya Balkrishan, who have been at the receiving end of the Congress-led UPA government at the centre with cases having been filed against them by various departments of the central government, is apparently the reason why the yoga guru is hell bent on seeing the back of the party in the states and the centre.

Sources close to Baba Ramdev said that he will undertake the fourth leg of his ‘Swabhiman Yatra’ from Alampur village in Gujarat on Oct 30 where besides the usual yoga exercise for healthy and disease free living, the people attending will also be given a discourse on ‘rashtravadi chintan’ (thinking on national perspective), which will be directed against the Congress.

They said that the yoga guru intends spending a full month prior to the elections in Gujarat, where elections are to be held in two phases on Dec 13 and Dec 17 holding free yoga camps under his ‘Swabhiman Yatra’. “The Swami will also emphasize on the need of voting against the Congress in these camps”, they claimed.

Sources said that the aim of these camps is not only on educating the masses on the benefits of yoga for a healthy living, but also to expose not only the scams that have taken place under the Congress government, but also the misdoings of the party, since independence of the country, which has not been done to date.

They said that the yoga camps will be held free of cost to ensure that there is maximum attendance from the immediate surrounding areas, where the gathering will also be told on the need of voting against the Congress in the state. This should help Modi in retaining power in the state and perform a hat trick of victories for the BJP in Gujarat, they felt.