Sri Mallesham hails from a poor weaver family. Having discontinued his studies after 6th class he joined his elders in handloom weaving.  Seeing his mother’s pain who had to weave the thread around studs 9000 times over a length of one meter, Mallesham decided to do something about it. He bought a book of embedded systems, along with Telugu translations and got down to work. He built a chip that reduced the work by ten day light hours.

Known as the ‘Laxmi Asu’ machine, Mallesham sold almost 300 machines so far, and the demand is for almost 10000 more.

Similarly, Vikram Rathod discontinued his studies after 5th class when his village faced a problem of dry fields. He couldn’t afford a machine so he developed one. A cycle connected to a motor with number of belts and pulleys. When pedaled, the cycle pumps the motor and waters the fields.

In a remote tribal village with no power, this is a great device for irrigating fields. Rathod was honored by President of India in 2003 for his outstanding innovation.

Two innovators who discontinued traditional education and simply went by the axiom “Necessity is the mother of invention” have one thing in common: Palle Srujana.

Palle Srujna observes the Honey Bee philosophy of discourse which is authentic, accountable and fair. Honey Bee does two things which many of us don’t.

Honey Bee collects pollen without impoverishing the flowers and it connects flower to flower through pollination. The idea is that when we collect knowledge of people we should ensure that people don’t become poorer after sharing their insights with us. 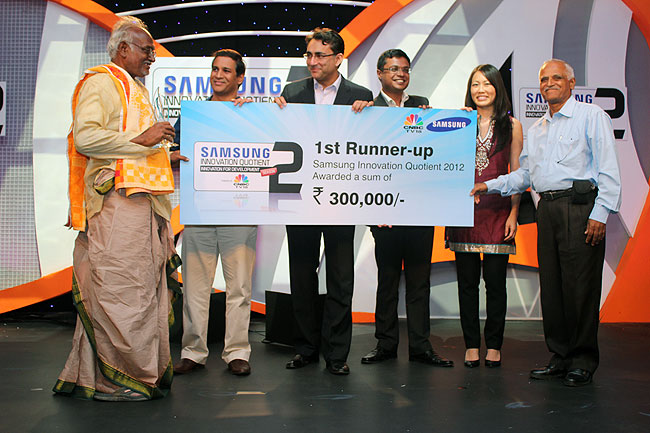 Started 2 years ago by Brigadier, Palle Srujana gives platform to these grassroots innovators. They have taken up many projects that encourage such innovators by equipping them with the necessary confidence and environment to showcase their ideas.

“The innovators are exceptional. They don’t see a problem as a problem they see it is a new opportunity for a solution“says Vice President Srikar J.

‘Gyan Shodh’ and ‘Shodh Yatra’ under Palle Srujana give a broader perspective of the innovations that take place.

Shodh Yatra organized by Palle Srujana is walks into the villages or districts to understand the needs and the ideas of the innovators.

Gyan Shodh is the documentation of these inputs during Shodh Yatra. Gyan Shodh is now included in the curriculum of BITS PILANI too.

** The ‘Laxmi Asu’ machine designed by Mallesham has won the second place in the Samsung Innovation Quotient. The initiative is luanchd by CNBC-TV18 & Samsung nationwide and the initiative received more than 300 entries.