Shimla: Beating a hasty retreat for threatening to break camera’s of media persons, earlier in the day, five time former chief minister Virbhadra Singh, who is also the star campaigner in the elections expressed regrets over the discomposure. 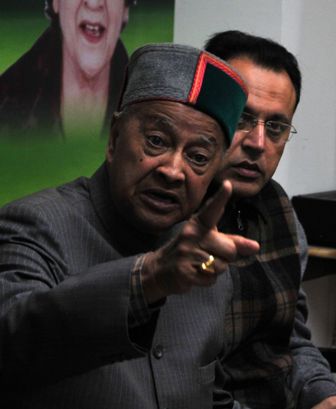 “I have always maintained cordial relations with the media, he said here in an interaction with the reporters.

Terming it as a one off incident that happened on the spur of the moment, Singh said, “in the heat of an election campaign, sometimes reporters do not wait and begin to ask questions suddenly.”

“I regret the incident that happened yesterday, respect the media and have no intention of hurting anybody,” he said.

Defending the veteran congress leader, earlier in the AICC spokesman Sandeep Dikshit in Delhi on behalf of the party said, “ “If anyone is hurt, we apologize. He should not have spoken like this. “But sometimes in the midst of election campaign such things do happen under mental pressure.”

Thanking AICC for defending him, the former chief minister said that it only showed that the party stands by me.

On being questioned about the agricultural income shown in Virbhadra’s revised income tax returns, the senior leader had retorted, “I will break your cameras. koyi aur kaam nahin hai tumahre pass.”

Dismissing the charges leveled by senior BJP leader Aurn Jaitley as baseless, Virbhadra said, “I will deal with all these issues after the elections is over on November 4.”

I have no other income other than that from agriculture,” he said. “Maximum comes from family owned orchards and near negligible from other sources.”

Responding to Jaitley questioning about his income, Virbhadra said, “he has no right to access my accounts.

“At the same time Jaitley is the accuser, the investigator, the prosecutor and also passes the judgment on the allegations leveled on me,” he said.

The entire amount invested in LIC policies was from horticulture produce income and all details had been filed before the concerned income tax officials, he added.

BJP is on the backfoot in the run up the state elections and fearing losing at the polls they have begun to target me.

Has it been probed that money from Inspat Company went into Virbhadra Singh’s accounts,” questioned the Congress veteran.

“My biggest asset is my dignity and honour. Each and every child in the state knows about my character and integrity. I cannot tolerate any Tom Dick Harry pointing fingers on my character,” said Virbhadra.

On being questioned about business relations with Anand Chauhan and the sharp increase in agriculture income while filing revised income tax returns, he said, “an agreement had been entered into with Chauhan, who is a friend, for managing orchards. The rise in income had already been explained to income tax department.”

Regarding the smear being thrown at him, Virbhadra said, I would be filing defamation cases against people who are out to malign my image and are indulging in character assassination.”