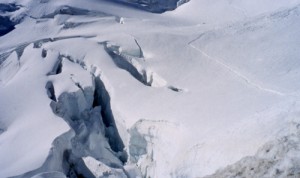 Dehra Dun : While the government believes that there is much that can be done to promote adventure tourism in Uttarakhand, as its number of mountains and glaciers are just about ideal for treks and mountaineering expeditions, but probably change in the maximum temperatures of the higher reaches, due to global warming or increased human presence, there is an increase in the number of crevasses, which could prove fatal for climbers and trekkers.

According to seasoned mountaineers here, a crevasse is a deep crack in an ice sheet or glacier and is formed either as a result of the movement of the glacier and resulting stress or a light shift in the rock base for various reasons. They are normally visible on various treks in the Uttarakhand glaciers, but guides normally know where they are and how best to avoid them, they claimed.

Admitting that crevasses could be dangerous to both mountain climbers and trekkers, they said that they can have vertical or near vertical walls. They get narrower as the depth increases, where climbers or trekkers can get stuck and they can be as much as 45 metres deep, making rescue almost impossible and they can also be as wide as 20 metres or more which are hard to cross, they maintained.

Uttarkashi tourism officer Khushal Singh Negi admitted that that permission for the popular Kalindi trek in the region was not being given, as it was not safe during this period. Though he claimed that the reason was unpredictable weather at this time of the year, but informed tour operators said that the number of crevasses that were being reported on the trekking route was the major reason.

They said that a number of trekkers who had gone on the trekking routes, specially on the popular Gangotri-Kalindi-Badrinath and Gangotri-Udankol-Kedarnath treks in the higher reaches of this small mountain state were returning disappointed because of the number of crevasses that they were encountering, which was making trekking, hazardous, rather than enjoyable.

Tour operators said that an eight member, German trekking party wanting to undertake the Kalindi trek was not given permission citing unpredictable weather conditions. “Likewise, trekking parties from Singapore, Pune, Maharashtra and other foreign countries on the Gangotri-Kedarnath trek returned from Udankol because of wide crevasses that they encountered.

However, officias sources said that the reason why trekking parties had been stopped from undertaking the treks in the higher reaches of the state was because of the unpredictable weather conditions at this time of the year, which could take a turn for the worse at any point of time. “The trekkers lives are at risk and the state gets a bad reputation, should there be any untoward incident”, they pointed out.

But trek operators said that it is normal for trekkers to undertake treks on these heights till the middle of October, but the increased number of crevasses, which had been reported by trekking parties that had returned from mid-way was the major reason for permission not being given, as it is feared that it may come as a setback to adventure tourism potential of the state.