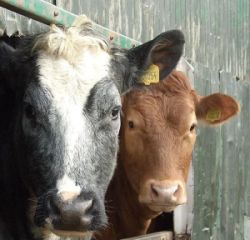 A farmer is getting mobile phone text messages from his cows in the middle of the night telling him they are in the mood for love.

This is the sort of thing that gets news columnists a bad name. It sounds unbelievable but it’s true: it was in the New York Times last week. Swiss scientists implanted transmitters which automatically send text messages when the cow is “in heat”. The farmer then runs to get the bull to impregnate them, the medical term for what the rest of us call (pardon my language) “inseminating”.

I was forwarded the report by an angry unmarried male reader who said: “Why are scientists wasting this wonderful new technology on cows?” Exactly what I thought. Surely the SINGLE BIGGEST PROBLEM facing humanity today is men not knowing what mood
women are in. Ask any man. Or woman, come to that.

The fact is the cow-mood-reading device, made by a Swiss firm called Anemon, is wasted on cows. The gadget costs $1,400. In India, an entire readymade off-the-shelf cow costs about 15,000 rupees.

Yet the device could transform human society, particularly if men installed it in their women secretly, so that we could appear to spontaneously do/say the right thing at the right time.

If we did succeed, life would be so easy. Husbands could go to the office and slave away at updating our Facebook pages until a pre-set message popped up on our phones. “Ding! This is an automatic message telling you that this would be a good time to go home with a box of chocolates or better still a credit extension on the joint Mastercard.”

The romantic husband could then rush home to find his wife entertaining the postman.

North Korea said last week it has missiles which can reach the United States. Have you ever seen one of their missile launches? They barely get out of North Korea. The only way they could get to the US is if they Fedexed them.

An undertaker lost his licence last week after he chopped up a corpse too fat to fit into the cremation furnace. I feel sorry for mortician William Ellenger, who lives in the US and so will probably face the fat corpse problem a lot.

After arresting him, police found that chopping up dead people is yucky but not actually illegal. Judges took away his licence anyway, as punishment for not asking the relatives first. “Hello, I’m from the funeral home and wonder if you’d mind if I lopped off a few of grandma’s limbs?” If people in the US get any fatter, they’ll have to switch to traditional Varanasi-type funerals, burning bodies on river banks.

Motherhood changes women. Reader Dorcas Cheng Tozun used to be an extremely demure young lady. But now she’s had a baby and talks about shockingly lurid things in public. She’s just posted her latest problem on the internet: diapers no longer soak up the huge amount of liquid baby emits during the night. I had exactly the same problem with my kids, who passed more than their bodyweights in water. I reckon babies work like super-powerful dehumidifiers, extracting water vapour from passing clouds and condensing it into thousands of gallons of yellow liquid.

The reason I mention this is a recent Reuters story on the business pages. An explosion in a chemical plant in Japan is likely to cause a planet-wide diaper shortage, it said. Next: Mother of three found drowned.

A guy sneaks out of a hotel without paying. He leaves nothing behind except a fake name in the guest book. The perfect crime? Nope. A guy tried it recently and scientists traced the villain from a toothbrush he used, it was revealed in court last week.

What amazed me was that DNA tracing is now so cheap and easy that cops used it to catch guys who commit smallish crimes – the hotel above was a US$50 a night guesthouse at a seaside resort in Wales.

The cutting was sent in as an entry for my dumb criminals file, but I reckon it’s really about smart cops, and got me thinking. If DNA tests are now so quick, no one will ever be anonymous again. This is a huge change. It’s pretty much worth all of us having ourselves tested just in case we are the illegitimate offspring of Arnold Schwarzenegger. Some of us surely are. I’ve long had my suspicions.

Even better: people who commit small, irritating crimes will no longer be able to get away with it. The schmuck who wets the toilet seat: traceable. The idiot who presses all the elevator buttons: traceable. The man who gets up early, reads my newspaper and puts it back, folded badly: traceable. For all pedantic, judgmental, revenge-oriented people, life’s going to be GREAT. My time has come.

After journalists accused dead UK TV host Jimmy Savile of having been a child molester, his nephew Roger Foster said last week the accusations were unfair because “the law says you can’t defend yourself when you’re dead”. What law is he talking about? The laws of physics? Hard to get those changed.

There’s been a massive outbreak of irony in China. It spread from Beijing to the outer provinces in days.

It started with a popular singer trying to win The Voice of China, a TV talent contest (a description which seems to apply to all TV shows these days). In the final, the pop-star surprised his audience by singing an ultra-patriotic number called I Love You China. This guaranteed him a win from the judges – but viewers reacted with a massive irony attack. His fan-base across the country declared him instantly uncool. You can’t be pro-authoritarian and a pop star at the same time. It’s like trying to combine the jobs of male stripper and Pope. One precludes the other.

Within days, there was another outbreak of irony. Every time people are ill-treated in China, they try to protest but authorities halt the demonstrations with icily calm government spokespeople explaining that it is vital to “maintain harmony” and “preserve stability” and so everyone should “shut the heck up”, etc.

Well, workers who were cheated of their pay made a video which looked like a government announcement. They calmly said that non-payment of workers had to stop so as to “maintain harmony” and “preserve stability” so let’s not “shut the heck up”, etc. The video went viral.

Watch out for China changing its slogans to be more ironic: “Communism will rule the world, yeah right.”

Scientists have discovered that in winter, the planet Mars is warmer than most of Canada. It’s probably livelier on a Saturday night too.