Shimla: Nursing an injured finger, the 57 year old Rajeev Khanna, a scion of the Oberoi hotel empire, was air-lifted to Chandigarh after his motorcycle hit a roadside railing close to Manali town.

Having raised safety measures for the years event, a standby helicopter was pressed into service for the first time in the Raid that is counted among the 10 toughest road rallies in the world.

Khanna is a legendary rallyist and has participated in many top international motor sport events.

Sunny Sidhu drops out of Raid

Another drop out on Day 1 of the Raid was Chandigarh champion rallyist, Sunny Sidhu, six time winner of  the Maruti Suzuki Desert Storm.

He had to bow out of the rally on account of engine trouble in the third competitive stage between Chimni to Khanag, an uphill drive to Jalori Pass, of the event today.

Driving a Mahindra XUV for Team Mahindra at the event Sidhy said “I am certainly disappointed.” 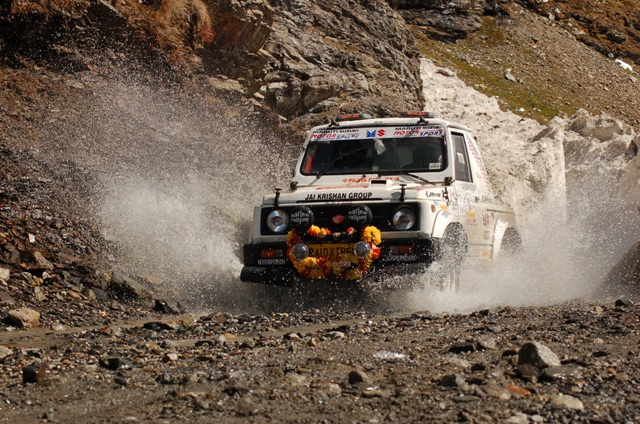 Only the toughest get to survive the Raid: Four other accidents on Day One

It was day packed with high drama. Simranjit Singh, a rallyist from Chandigarh and his navigator Karan Narang from Gurgaon were saved by a tree when their Gypsy swerved off the road near Nag Jubbar village in Shimla district.

Rescue officials rushed to the site and the vehicle was pulled out with a crane.

In another incident, Lt Col R S Rai and Lt Col Dahiya of Team Army went down almost 200 meters down the mountainside on the second competitive stage of Day from Luhri to Behna.

The team was attended to almost immediately by an ambulance stationed near the mishap site.

In the third mishap for the day, Kishore Thakur of Gurgaon and his navigator Mansingh Jaswal participating in the Adventure Trail category went down about 30 feet off the road in the competitive stage of the event. The duo were attended to by an ambulance and are safe, said the organizers.

In yet another mishap, the fourth for the opening day, Nitesh Kumar of Bangalore, driving a mobike, went down in competitive stage III, running from Chimni to Khanag. Kumar was not injured in the accident.

The 14th Maruti Suzuki Raid De Himalaya took off in the wee hours today from Shimla and ended the day in Manali.

After going through Manali, Kaza, Gramphoo, Koksar, Darcha and the Khardung La pass, the six-day marathon motorsport event will conclude at Leh on October 12.