The Modi government completed one whole year in office a while back and the entire nation has been deafened by the trumpets of triumph that have been raised by party workers in its praise. Surrounded by all the clatter, the common man is wondering whether he truly has transgressed Kalyug and is on the path to Ramyug as he is repeatedly being told. The voters are confused. It is for the first time that the citizens are witnessing hysterical hue and cry courtesy a young government highlighting its own achievements.

The whole country is observing a spectacle in which we find a regime patting its own back. One may argue that it is in the nature of all political parties to overhype their achievements to hoodwink the populace. This is very much true, political outfits since time immemorial have employed these tactics during election season but the electorate has always outfoxed them by not falling prey to such gimmicks. After all, we can now be considered a mature democracy, having entrusted the responsibility of power ever since independence only on those parties which truly deserved to govern. 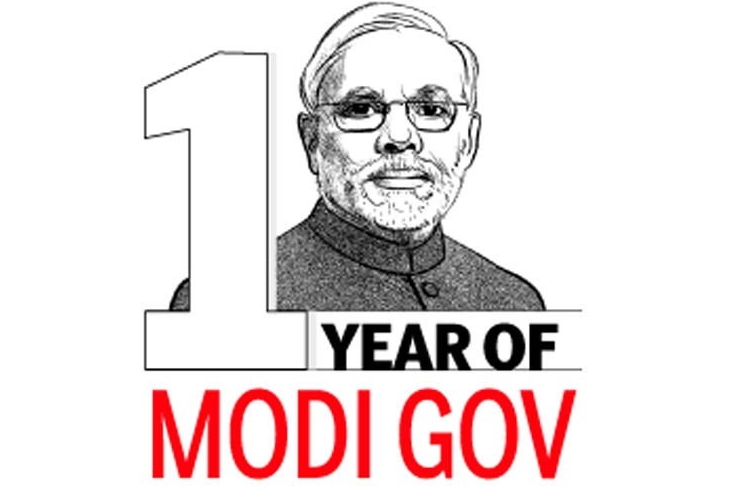 BJP leaders have given themselves a 10/10 on their self appraisal which has bewildered the entire country. While people know that politicians are inherently lousy characters who end up defying all mathematical logic, never has the country seen such brazen personal marketing of an individual at a time when elections are ages away. The common man is repeatedly being fed with numbers indicating increased economic growth, decreased inflation, rise in manufacturing etc at a time when he is facing difficulty in purchasing daal, the rate of which is hovering around Rs 140/kg. This has made him question the very promise of Ache Din, dependent on which he voted the BJP and its allies to power.

Pragmatic individuals supporting the BJP may argue that radical change after 10 years of dismal congress rule will take some time and the nation needs to be patient. This argument is based on hard facts and has sound logic behind it. The only thing defeating these rational arguments is the constant cacophony of all the party leaders led by our Prime Minister repeatedly telling the people that change has already arrived and it is so evident that individuals who are unable to observe it are nothing short of delusional. This boisterous strategy which has been employed by the party may end up sinking it. Never has our country responded positively to politicos glorifying themselves prematurely, case and point being the India Shining campaign, which it seems has had no impact on the new generation of BJP leaders.

Every policy decision taken by the government goes through a gestation period before it permeates into the micro level. No one is denying the fact that after a long time there are tinkering sounds indicating that the government is on to something. But the party and the government have to endear time before baking their own desert. They must realize that for the common man to truly appreciate macro level policy initiatives he must be bestowed with jobs, falling food and commodity prices and an increase in his real income. These are occurrences which will take time maybe even more than five years. At this stage it is important for the party to labor towards achieving what it had promised instead of promoting what it hopes to accomplish.

As the Government moves onto the second year we have seen positive outcomes on various issues. The past one year passed with no big corruption scandal, which seemed to be the monthly protocol under the previous congress government. We have also seen a surge of constructive steps as far as our foreign policy and national security is concerned, which ultimately culminated in us conducting a successful operations against insurgents holed up in Myanamar. Despite the success in these sectors, there are other areas which are suffering considerably. Agricultural productivity is slowing down and the unseasonal rains have deteriorated the situation even further. We may be showing a growth of over 7% but boost in manufacturing and Make in India is yet to be seen at the ground level. The hope of Modi the messiah bringing back black money seems to be fading with the passing of a toothless legislation against illegal wealth. For the government and the party to keep maintaining its goodwill, it must let the people judge its success independently and focus on these issues where the perception is building against them.

Never has a political party had it so easy in the past two decades in terms of opposition. The congress is still reeling under the side effects of having Rahul Gandhi at the helm, who it seems is as intelligent as a gold fish. The fragments of the Janta Party are still fighting over leadership, even after announcing their formal merger. The only true antagonist which the party now has to deal with is its own hubris and over confidence. It must battle against it and give out a stellar performance as it had guaranteed the people