Mewat was carved out as an independent district after dividing Gurgaon and Faridabad in 2005, after 1966 when Haryana was declared one of the states of India. Mewat was inhabited by a numerically preponderant ethnic group called Meo (Muslim). 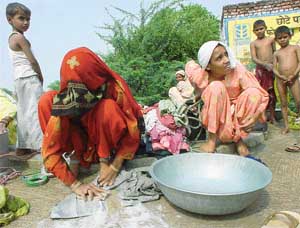 Total Population of Mewat  is 10 lakhs with growth rate 37.94%, sex ratio of 906 and literacy rate of 56.1 % (GOI, DLHS) 2011). It represents a picture of most backward regions of our country, untouched by the vital infrastructure -education, health, basic amenities- railway links etc. and sits in backyard (70 Km from capital) of New Delhi.

Those who live closer to the hilly ranges of Aravali Hills also keep a few sheep and goats. Average milk yield is 7000-8000 lit. /day but due to heavy indebtedness most of the farmers are forced to sell the milk to the lenders at lower than normal price.

About 90 % of the work (agriculture, fetching of water, fuel & fodder collection, milking etc) is done by women only .Women were the very deprived part of Meo community. As over all education level of Mewat was 44% viz Meo have 27% and Meo’s women have only 3% .

Mewat is totally patriarch society; they do not allow the girls to go outside the village for study or any other work. Meo do not allow outsiders to talk to their females in the village. This was a very challenging task for me. It was only with the help of key informers provided by my organization in each village, I could interact with them.

All my life I had heard about the term ‘population explosion’. It was during my stay in the Mewat village, I literally saw houses exploding with newborns. Every married couple had 10-12 children on an average even after various effort of government under NRHM and ICDS schemes.

Average age of women getting married in the area is 13. They have their first child by 14 or 15 and an average woman in Mewat have around 11 pregnancies in her life. Abortion or use of contraceptives is never welcomed by the Meo society.

I could not see any PHC at any village .Skin problems like Scabies, heart problems like Hypertension, eye problems like myopia, Malaria, TB and Cancer are the major diseases observed. People often don’t trust doctors here. After the delivery, child and mother are fed only jaggery and kept in a dark room laced with cow dung, for a week. This social taboo exists from long time ago. The life expectancy for women is also lesser than their male counterparts. Women are forced to conceive even at the age of 45-48.

The Meo community does not like intervention of doctors in the matters of death and life. The government doctors in Mewat also are not happy. The postings in Mewat district are considered as punishment and doctors try everything to avoid being posted here as I have some conversation with doctors posted at the district CHC.

With a family size as big as 11 or 12 in some cases, looking after aged and newborns becomes a very hard job for women.  Besides the health infrastructure, Mewat being a backward place is quite remote in terms of attitude to healthcare.

Clean water is still a major problem in Mewat as ground water of whole geographical area is saline. Everyday villagers would fight for water as government has made chamber/booster at some villages but there is no pipe line supply to each household so women walk 1-2 km daily to fetch water for drinking.

As a Sustainable Development expert, I would suggest, winning the confidence of local community has to be the first step and establish educational & health care facility at village level to make the people aware about the outside world. Immediate initiative should be establishing Mobile Medical Units in the Mewat region because developing infrastructure will take a long time.

Multimedia use – promotion of Pulse Polio, Aids awareness and birth control and bring co-ordination in works of different NGOs and state agencies. Then we can expect development in Mewat.

The author is associated with TERI University Delhi. It was his personal experience while his stay at the Mewat Village for two months as a Research Assistant with STADD, a Delhi based NGO.