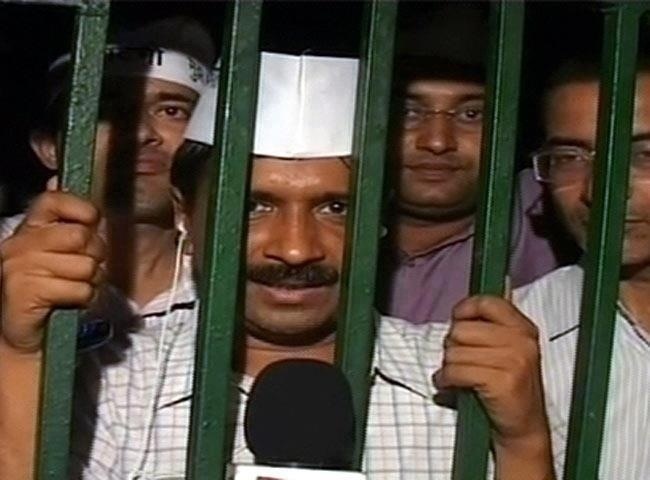 New Delhi: India Against Corruption (IAC) member Arvind Kejriwal and his supporters were Friday detained while protesting alleged irregularities in a NGO run by Law Minister Salman Khurshid and his wife Louise. Taken to a stadium on the outskirts of Delhi, they refused to leave even after being later released by the police.

Police swooped on around 150 IAC members, including a group of disabled people from Rashtriya Viklang Party, when the protesters were on Rajpath, about a kilometre from Prime Minister Manmohan Singh’s 7 Race Course Road residence.

The crowd was headed towards the prime minister’s residence demanding Khurshid’s dismissal from the cabinet over alleged misuse of funds sanctioned for buying equipment for disabled people in different parts of Uttar Pradesh.

Rashtriya Viklang Party president K.K. Dixit, who was among the protesters, alleged that the NGO run by Khurshid’s wife had not properly utilised the funds allocated to it for welfare of the differently abled.

“Khurshid and his wife’s Dr. Zakir Hussain Memorial Trust were allotted Rs.71 lakh to provide cycle rickshaws to the differently-abled in Uttar Pradesh’s 16 districts. But they misused the funds as per an RTI,” he alleged.

Khurshid has denied the charge.

As the protesters were moving towards the PM’s house, four companies of Delhi Police swung into action, detaining and putting the protesters into Delhi Transport Corporation (DTC) buses for taking them to Parliament Street police station.

“Only five members can be taken to the prime minister’s residence, not everybody,” a senior police officer told Kejriwal but he did not agree to the proposal. The IAC had said earlier that the prime minister had refused to meet Kejriwal.

The bus carrying Kejriwal was stopped near Gol Dak Khana in central Delhi by his supporters. Police then separated Kejriwal and took him to a stadium in Bawana in a police van. His supporters were detained in the police station.

“We will remain in jail and we will not come out,” Kejriwal said from the bus.

Kejriwal said he wanted to submit a letter to the prime minister detailing his allegations against Khurshid.

“A police complaint should be filed immediately against Salman Khurshid and his wife. Khurshid should be removed from the cabinet till proven innocent. Both are influential people, they can tamper with evidence and pressure witnesses. They should be arrested,” he said.

Police announced in the evening that IAC activists had been released from detention but Kejriwal decided to not leave the makeshift jail at Bawana.

IAC said in a statement that Kejriwal and other IAC activists have decided not to leave Bawana to press with their demand for Khurshid’s removal from his post.

The statement said Kejriwal had told the gathering that the “law minister had insulted the high office and he is supposed to uphold. Both the minister and his wife are influential people and they can tamper with the evidence”.

Kerjriwal also said it was shame that the government was using force to “muzzle the voice of disabled people” rather than listen to them and take decisive action and uphold the law.