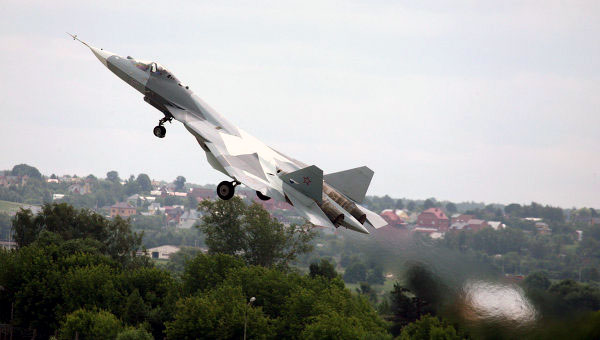 New Delhi: India has committed an initial $6 billion for jointly developing a fifth-generation stealth combat jet with Russia, a project that will eventually cost the country $30 billion and envisages the manufacture here of 144 aircraft.

The IAF chief, Air Chief Marshal N.A.K. Browne, told India Strategic defence magazine(www.indiastrategic.in) in an interview on the occasion of the IAF’s 80th Anniversary Oct 8 that all these aircraft would be single seaters, the same which the Russian Air Force will have, but some components like onboard computers and systems would be different as in the case of the Sukhoi SU-30MKIs.

Now designated PMF, or Perspective Multirole Fighter, by Russia, the Indian aircraft would be made in India, Browne said, adding that discussions with the Russian government are already on.

India and Russia had signed an agreement in this regard Dec 21, 2011, to set up a 50:50 joint venture on the lines of BrahMos Aerospace and share development work.

Indian scientists are keen to pool in the R&D effort, and the agreement calls for joint development, particularly in design, guidance systems and onboard software. That means India will also have a proprietary share on Intellectual Property Rights (IPR).

The exact costing is yet to be worked out but, inclusive of the development costs, the figure could be around $30 billion, according to HAL sources.

Notably, a figure of 200-plus of two-seater version for India was considered earlier with possible induction from 2017 with an initial lot from Russia. Development in that time frame however is not happening.

To cut down on the development costs and the timelines, the IAF has plans to begin their induction from 2020 onwards, Air Chief Marshal Browne said.

Discussions with Russia are on to sign the first R&D phase, and the first prototype is likely to be delivered to India in 2014, followed by two more in 2017 and 2019. The series production “will only be ordered based on the final configuration and performance of the third prototype”.

The air chief observed that speed, reach and precision are the keywords for the IAF’s transformation that is now on.

He noted that various acquisition programmes of the IAF were going on as normal and so were the upgrade programmes. The IAF had already spent around Rs $30 billion in the last five years and that there was adequate budgetry support to execute its transformation programmes by 2027, when all the 42 combat squadrons sanctioned by the government will be operational.

He reiterated that he expected the deal for 126 French Rafale medium multi-role combat aircraft (MRCA) to be finalised by March 2013. There are virtually daily meetings between the aircraft partners, Dassault, Thales and engine maker Snecma on the one side and IAF, HAL and defence ministry representatives on the other.

On the legacy aircraft, he said that while the Soviet-vintage IL-76 and AN-32 transport aircraft were already under upgrades to give them an extended life of 10 to 15 years, the tender to upgrade the IAF’s 100-odd Jaguar aircraft with new engines was about to be issued – likely by October-end – to Honeywell of the US.

IAF tenders for combat and heavy-lift helicopters and midair refuellers have already been opened over three weeks beginning mid-September. While the combat helicopter deal has gone to Boeing for its Apache AH-64D because Russia withdrew its Mi-28 helicopter, the winner of the other two would be decided on the basis of lifecycle costs. Calculations were being done now, and it should take a couple of months in each case to declare the winner.

Notably, all the aircraft deals with the Soviet Union/ Russia so far have been on a government-to-government basis, including for the new fifth-generation fighter aircraft (FGFA). This is the first time that Russian aircraft – Mi-26 heavy-lift vs Boeing CH 47F Chinook, and the Il-78 against the Airbus MRTT – are pitted in global competitions in India, involving mandatory offsets. If the Russians win, they will have to do what is required by the DPP (Defence Procurement Procedure) and invest 30 percent of the deal back in the Indian defence industry.

The (FGFA) programme began in 2006 and this, as also the deal for the Indian Navy’s 45 MiG-29 shipboard fighters, is exempt from offsets. The MiG-29 programme is part of the INS Vikramaditya (Admiral Gorshkov) aircraft carrier’s acquisition programme, signed well before the DPP came into place.