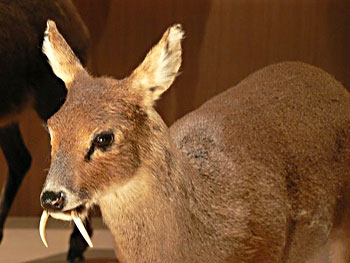 Dehra Dun: The severely endangered musk deer, hunted by poachers for its musk gland, found only in adult males which lie in a sac between the genitals and umbilicus, the secretions of which are mainly used to attract mates, faces another threat.

Its food, the skimmia known as kedarpati in the local dialect, is being widely exploited by the locals, causing an acute food crisis for the deer.

Skimmia belonging to the Rutaceae family is an aromatic, erect or creeping shrub found in the Himalayas at a height of over 6000 ft to 10,000 ft, which also happens to be the habitat of the musk deer. As this is one of the major shrubs growing at the heights, it forms a staple food, along with other varieties if shrubs and grass for the small deer.

The skimmia plants are strongly scented shrubs and are widely used for the manufacture of incense. The leaves of the plant are also used for treatment of small pox while its roots are used as an anti-dote to snake bite in indigenous system of medicine. The dried leaves are also used as insecticides and in treatment of cold, fever and head ache. The leaf extract also has anti-inflammatory properties.

The area under the plants is reducing mostly because of the large scale erosion of land and also due to landslides and landslips which are rendering fertile land barren. Because of the large scale exploitation of the plant by villagers, who pull out the plant as its roots also have medicinal properties, the regeneration is low; this is also reducing skimmia shrubs at those heights. 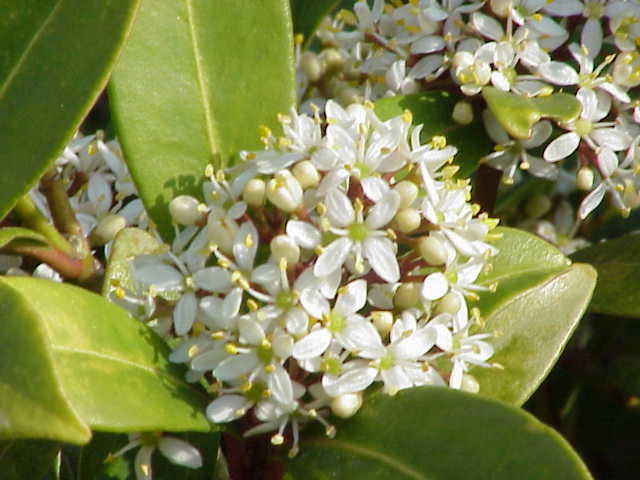 Informed sources here said that one of the reasons why the musk deer opts feeding on the leaves of the plants is that after digestion, the cells of the musk sac react with the juices of the leaves and adds to to scent emanating from the musk gland of the deer. Villagers have started exploiting the plant vociferously because of its medicinal use and use in manufacture of incense.

Poachers are known to hunt down musk deer because of its musk gland which can fetch as much as $50,000 in the underground markets of the world. The musk gland is in great demand by the cosmetic industry and agents of companies are known to go to villages at the heights in search for the muck glands.

It is mostly the villagers living in the Himalayan heights who are known to poach the musk deer, which is found at heights of over 8000 ft. The small animals mostly move about in small herds and are very susceptible as the winters start and their habitat comes under snow. The musk deer is known to come down in search of food and is killed by poachers lying in wait.

Though no latest census has been done of the musk deer, but the last official count of the animal is said to have been done about 15 years back, when their number in the Himalayan region was put at about 1200. Another count of the animal was done in the Askot Reserve, a prominent dwelling of the musk deer in 2006 and its number there was put at about 100.

Experts here said that the musk deer, being a herbivore has limited options of food at those heights as the flora is limited. Especially during the winters, when snow covers the land, even grass is not available to the animals, who are then mostly dependent upon shrubs like skimmia and others for their food, but exploitation of the shrubs in large scale by man was causing acute food shortage.

Chief wildlife warden S K Singh admitted that exploitation of skimmia is being done at a large scale by the locals since quite some time. Taking into consideration the need for the plants and also how to go about its plantation in the wilds as fodder for musk deer, it has been decided to have a nursery of the plant at Kalsi range and efforts made to undertake its plantations in the higher reaches.