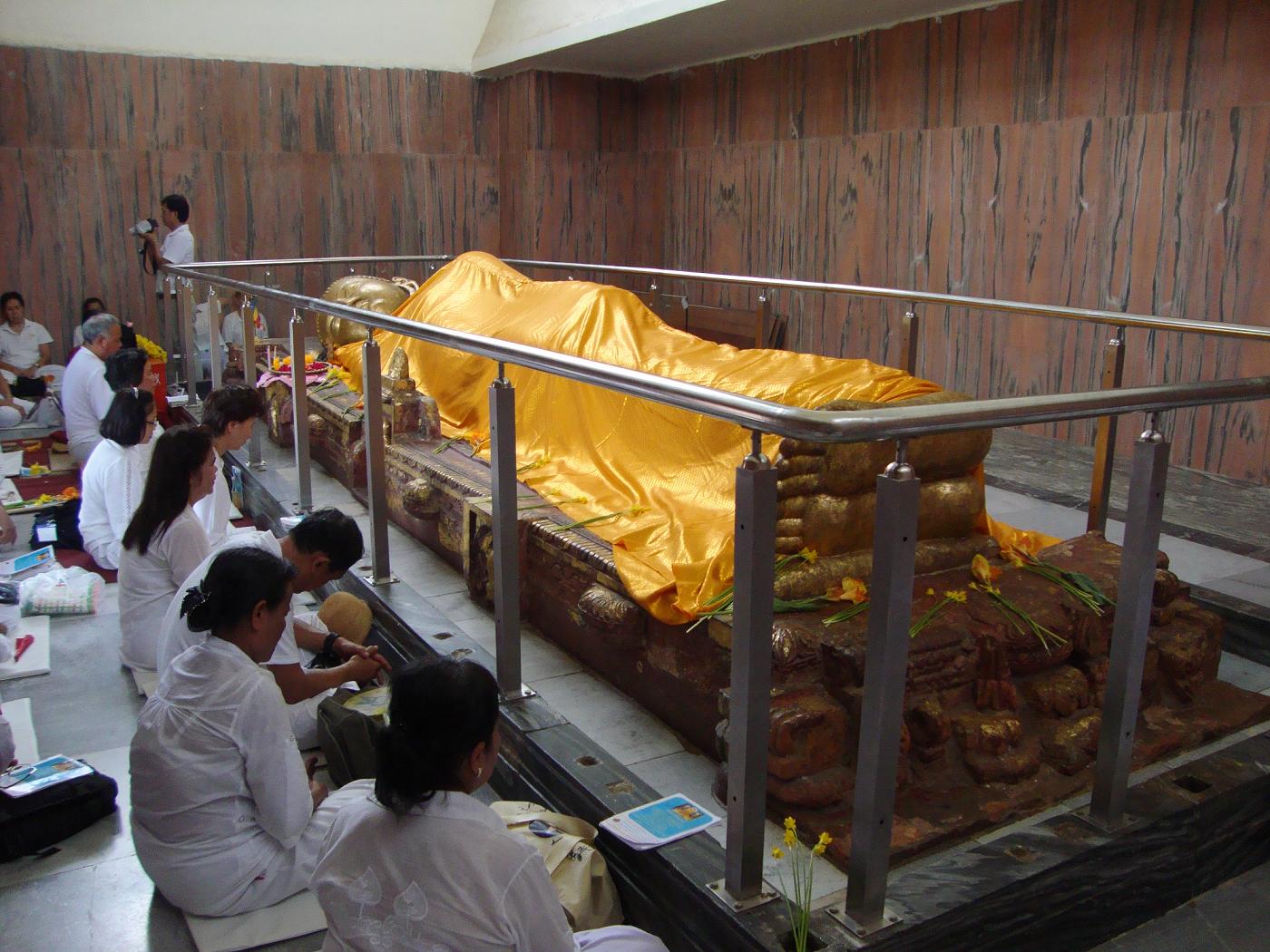 Kushinagar (Uttar Pradesh): Welcome to the land of the Buddha. A breather from most other religious destinations, which, ironically, reel under chaos, Kushinagar – the place where Gautam Buddha breathed his last – is a place where you can pray in peace or simply soak in the beauty of the architectural marvels and the natural surrounding.

Situated 51 km east of Gorakhpur in Uttar Pradesh, Kushinagar is one of the four important religious destinations for Buddhists. This is the place where the Buddha delivered his last sermon, and died. The other three important destinations are Lumbini, Bodh Gaya and Sarnath.

It’s of little surprise then that the place, which is well endowed with greenery, is flocked by tourists – both domestic and foreign – through the year, but especially so in the cooler months between October and April.

It is estimated that nearly two million tourists visit Kushinagar every year.

“Many tourists come to Kushinagar to pray and to pay their respect to the place where Lord Buddha delivered his last sermon and finally rested in peace. From among foreign countries, we mainly have people coming from Thailand, Japan, China, Korea, Sri Lanka and Myanmar,” said Bhadant Choudhury, a Buddhist monk at the Mahaparinirvana temple.

One of the main attractions of the place, the Niravana Chaitya or the Main Stupa, was excavated by Carlleyle in 1876 and stands at a height of 2.74 metres. A copper vessel was unearthed at this site and it bore an inscription in ancient Brahmi, which stated that Lord Buddha’s remains had been deposited there. The Stupa was restored and its chamber was ceremoniously closed in 1927, in the presence of 16 Buddhist priests. Several gold, silver and copper plate-inscriptions were deposited inside, recording the facts of discovery and identification of the monument.

Right in front of the Nirvana Stupa is the Mahaparinirvana temple, which you wouldn’t want to miss – not just for religious purposes but also for the grandeur of a 6.10 metre-long statue of the Buddha in a reclining position which dates back to the fifth century and was also excavated in 1876. While it looks as if it was made of gold, the statue, which represents the dying Buddha, is made of monolith red sandstone.

Sitting on the steps of the temple, Choudhury motioned to the beeline of devotees to wait for some time until a Thai delegation of 20 people inside were done with their chanting.

“The foreigners travel great distances to reach this place and that too for a few days. So it doesn’t make much of a difference if the rest of us wait for a few minutes…and people really don’t mind. Everyone is patient,” he said, as other devotees sat on the steps with him, chatting with the monks.

One of those waiting, Lakshmi Devi, from the neighbouring state of Bihar, said: “It’s all right if we have to wait for a little while for the foreigners…they have, after all, come from so far and are our guests. My family and I wanted to pay our respects to Lord Buddha, and we are here. What will we get by creating a fuss?”

Considering the heavy flow of foreign tourists, many neighbouring countries have built their own temples near the Mahaparinirvana temple. Their temple complexes also have guest houses to accommodate their citizens and are again a must-see for the sheer beauty of their architecture.

The Watt Thai temple, for instance, is a huge temple complex built in the Thai-Buddhist architectural fashion. The Japanese temple has a beautiful Ashta Dhatu (eight metal) statue of the Buddha which has been brought from Japan. The Linth Son Chinese temple, Myanmar temple and the Korean temple, among others, are also some must visits.

Just about 400 yards from the Nirvana Stupa is the Matha Kuar shrine which has a colossal statue of the Buddha in the ‘Bhumi Sparsh Mudra’ (earth touching posture) under the ‘Bodhi tree’, carved out of a single block of stone. The inscription at the base dates it to the 10th-11th century. Also on the itinerary should be a visit to the Ramabhar Stupa which is the cremation ground of the Buddha.

Although there is no air or rail link right to Kushinagar, it is well connected to Gorakhpur, which in turn has a railway station and an air strip. Food and accommodation are not a problem with numerous guest houses and restaurants with, predictably, names like Vipassana and Nirvana! So pack your bags for a few days of nirvana in Kushinagar!
By Azera Parveen Rahman/IANS