Shimla: Sensitive about allowing non state residents to buy agriculture land in Himachal, it is a core election issue with both Congress and BJP out to get at each other about who exercised more discretionary powers in permitting land deals in the state.

“If anybody has objections, the matter can be challenged in the courts,” said Dhumal. 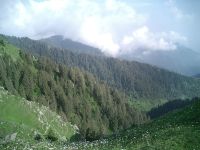 A discretionary clause, liberally used by successive governments, wherein government of the day can permit selective individuals to buy agricultural land in the state, is what has promoted both BJP and Congress to accuse each other of putting ‘Himachal on Sale.’

Between 2003-07, Congress granted permission to 2398 outsiders to buy land here,” says Satpal Satti, BJP president. “In comparison, since 2008 our government has only given 1497 permission,” he adds.

Raging controversies over land sale to a prestigious DLF housing project in a lush green forested area of the city and large chunks of lands bought by private universities raked up by opposition congress, had forced the BJP government to set up an one man judicial commission to go into all land deals in the state.

Besides pointing out several land deals that were in violation of state laws, the commission report also recorded that several religious organizations had bought far in access land than what the HP Ceiling on Land Holding Act of 1972 permitted

‘Himachal is on sale,’ Virbhadra Singh says at public rallies. “All land deals will be got investigated,” he adds when a Congress government is in place.