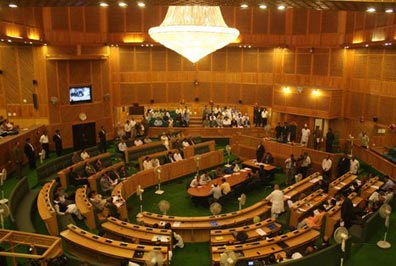 Srinagar: On the first day of the autumn session of assembly, J&K Legislative Council adopted a unanimous resolution condemning a film deemed offensive to Islam and asked the Centre to take up the matter with Washington which met for the 10-day autumn session here.

Minister of State for Home Nasir Aslam Wani requested the Chairman of the council Amrit Malhotra to adopt a resolution, condemning the anti-Islam film and also include slain panchayat members and former Maharashtra Chief Minister Vilasrao Deshmukh in the obituary references.

Speaking on the obituary references, Minister for Medical Education and Sports R S Chib, who is the leader of the House, condemned the killings of Panchayat members and termed these as “brutal and inhuman.”

Before adjourning for the day, the Council observed a two-minute silence as a mark of respect to the former Union Minister, the former legislators, and the Panchayat members killed by suspected militants.

Barring the first day, the ten day autumn session is expected to be steamy over the empowerment of anti-graft and transparency institutions like State Information Commission (SIC) and State Accountability Commission (SAC), violation of juvenile rights,  and granting powers to Panchayat institutions and recent killing of Sarpanch by militants.