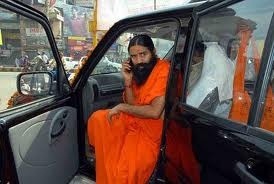 Dehra Dun: Perhaps taking a cue from the Tibetans who for years have been burning Chinese products and sending the message of the occupation of Tibet by China, Baba Ramdev today burnt some foreign products at Libberheri village in Haridwar district to protest against the central government’s decision of allowing FDI in retail.

The Yoga guru, who was accompanied by his followers and some members of the trading community said that the burning was symbolic protest against allowing foreign direct investment in retail, which be detrimental to the interests of the local producers and also pave the way for foreign giants to take over trade and commerce in the country.

He said that such symbolic burning of foreign products had taken place at various district headquarters in the country to signify the protest of the common man against he government’s decision of allowing FDI, adding that he would be starting a nation wide agitation against the move which was detrimental to the interests of the country.

Also resorting to political talk, which has now become his hallmark, Baba Ramdev said that India’s image in the comity of nations had taken a nosedive because of the various scams that had surfaced and were surfacing every other day, yet nothing was being done to bring their perpetrators to the book.

He said that developmental works had come to a standstill and the central government was the least interested in getting the money that had been stashed in banks and other institutions abroad back to the country. The money if brought back could help create a record number of new infrastructure in the country for the benefit of the common man, he added.

The Yoga guru said that there was a long fight ahead and he would continue the struggle till the next general elections in the country, adding that allowing FDI in retail was tantamount to giving the foreigners another opportunity to rule the country, which would not be allowed under any considerations.