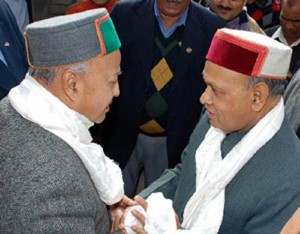 Shimla: The war of words is hotting up in Himachal Pradesh – literally.

The main political parties – the ruling Bharatiya Janata Party (BJP) and the opposition Congress – are fast issuing statements and counter-statements with the assembly elections just a few weeks away.

The parties are slinging mud at each other, raking up old controversies related to corruption.

In a statement issued here, former Congress cabinet minister Harsh Mahajan and legislator Sudhir Sharma said: “The state witnessed unprecedented corruption in the past five years under the BJP regime and its return to power would mean perpetuating corruption further.”

“The BJP government is not only corrupt but is also dominated by criminals as was evident from the affidavits submitted by candidates at the time of the previous assembly elections.

“There were criminal cases pending against eight out of the 11 ministers and 24 out of the 41 MLAs of the BJP. Thus, three out of five BJP MLAs were facing a criminal case,” the statement said.

Hitting back at its arch rival, the BJP termed the details of police cases faced by its 24 legislators as part of a “dirty tricks” campaign of the Congress.

“A party against whose state chief (former union minister Virbhadra Singh) charges have been framed in a corruption case must introspect,” BJP spokesperson Ashok Kapatia said.
Firing another potshot, five-time chief minister Virbhadra Singh Thursday said the government had betrayed schoolchildren by delaying free uniforms by two years under a scheme funded by the central government.

Reacting to government advertisements on free uniforms provided by the state, he said the government had failed to use the central assistance of Rs.84 crore for free uniforms in 2010-11 and 2011-12, depriving schoolchildren of free uniforms for two years.

The government became hyperactive during election year in implementing the free uniform scheme and splashing advertisements in newspapers and television channels about it, said Virbhadra Singh, who is spearheading the Congress’ election campaign.
The Right to Education Act entitles schoolchildren to free uniforms, notebooks, textbooks and the like, he added.

Earlier, the Congress accused the government of receiving kickbacks in purchasing ambulances under the National Rural Health Mission (NRHM)
programme.

“It’s a matter of concern and shame that BJP leaders have allegedly got kickbacks to the tune of Rs.7.24 crore in the purchase of ambulances,” it said in a statement Sep 10.

Besides mudslinging, both the political parties are trying to woo the common man by taking up their issues too.

Virbhadra Singh Wednesday took up with the central government the case of 22-year-old sailor Aman Kumar, a resident of the state who has been held captive by Somali pirates for the past 20 months.

Within hours of his statement, the government public relations department came out with Dhumal’s assertion that the chief minister had written to the union minister for shipping Aug 16 and also forwarded a representation of the victim’s father to the central government to ensure his release.

Himachal Pradesh is likely to elect a new 68-member assembly in November.