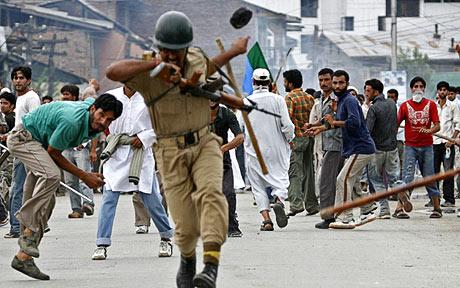 Srinagar:  Amidst an massively successful strike against the American film that mocks at Islam, tens of thousands of people were on roads across Kashmir. Though it was fairly peaceful everywhere, at few spots within Srinagar and peripheries, police burst tear smoke shells to quell the highly charged mobs that resorted to stone pelting.

Schools, shops, business establishments and banks remained closed due to the strike called by the J&K Muttahida Ullemai Ahli Sunnat (MUAS), a Kashmir based amalgam of various religious organizations and later supported by Kashmir Economic Alliance, a traders body.

The roads in most parts of the valley wore a deserted look as public and private transport remained off the roads. Unlike past strikes in recent times especially after 2010, there was very thin movement of some private cars and security force vehicles on the roads.

Reports said that parts of the city witnessed protests amid shutdown against the sacrilegious film. Hundreds of youth raising pro-Islam and anti-US slogans took out a protest march from old city towards UNO office Sonwar this morning.

As soon as the march which was coming back from Sonwar reached near Sangarmal Shopping Complex in MA road, a contingent of police and paramilitary CRPF resorted to baton charge and fired tear smoke shells to disband the protesters,” reports said.

“Chanting slogans against Israel and the US, several protesters said the America did not want to live in peace with the Islamic world. This is the reason they resort to such obscene acts and plots,” they said.

Life came to standstill in the rest of the districts of Valley amid protests at several places. Reports of protests shutdown poured in from the districts and towns of Budgam, Baramulla, Sopore, Kupwara, Handwara, Islamabad, Shopian, Kulgam, Pulwama, Ganderbal and Bandipora.

Hundreds of protesters staged protests against the blasphemous film and raised anti-US and anti -India slogans and took out a march in Main town Baramulla. Police swung into action and fired several teargas shells to disperse the mob. However the mob in return pelted stones and also attacked police station Baramulla. Four policemen were reportedly injured in the clashes.

In main town Kulgam, youth came out on streets and staged demonstrations. They also shout anti-US slogans and pelted stones on vehicles forcing them to go off roads. Protests also erupted at Khudwani and Qaimoh.

In Islamabad, clashes erupted in Malakhnag, Reshipora and Kadipora. Police fired tear gas shells to disperse protesters who retaliated by pelting stones. Four policemen were injured in the day-long clashes.

Peaceful protests against the film have been reported from several areas in the city and elsewhere in the valley.

“Police and Central Reserve Police Force (CRPF) deployed to maintain order in the city have been ordered to act with restraint while dealing with these protests,” a senior police officer said.

However, a police spokesman said that peaceful marches were taken out at many places across the valley against the blasphemous movie clips. Groups of people staged peaceful marches at Nowpora, Khanyar , Ziyarat Dastgeer Sahib, Habba Kadal, Kawdara, Noor Bagh, Kral Khud, Safa Kadal in Srinagar city.

Some miscreants also appeared at Tengpora Bypass and resorted to stone pelting who were chased away by police.