Shimla:  The International Roerich Memorial Trust (IRMT), which manages Russian painter and philosopher Nicholas Roerich’s estate in Kullu district of Himachal Pradesh, has over 8,000 artefacts, including his 37 rare paintings, an official said Tuesday. 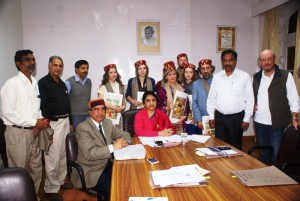 This fact came to light in an act of transfer of stock and inventory agreement signed between the state government and the Moscow-based International Centre of the Roerichs here Monday.

Rakesh Kanwar, director of Himachal Pradesh Art, Culture and Language Department, said on Tuesday that 8,126 artefacts belonging to Roerich and his family, who resided in Kullu for decades, have been documented.

These include 37 paintings by Nicholas Roerich, 12 paintings of his son Svyatoslav Roerich, 1,586 units of memorial objects, 1,736 books and journals and 3,070 ‘herbarium’ collections.

Kanwar, one of the signatories to the agreement, said a visiting team from the International Centre of the Roerichs, headed by IRMT’s newly-appointed curator Larisa Surgina, did stock-taking and verification of the estate.

For the past two months, the team was in the Roerich estate located in Naggar, 25 km from Kullu town, where Roerich came in 1927 from St. Petersburg and made the tiny village his home for more than 20 years.

Roerich’s wife Helena, a famous writer, and sons Yuri, a prominent Oriental scholar, and Svyatoslav, a well-known painter, and Svyatoslav’s wife Devika Rani all stayed with him in Naggar.

IRMT, comprising five Russians and 12 Indians, was founded July 6, 1992, to manage the estate and preserve the artist’s legacy.

Its executive committee has replaced curator Alena Adamkova, who headed the museum for nearly a decade, with two new curators — one representing India and other Russia.

O.C. Handa from India and Larisa Surgina from Russia have been appointed the new curators. Handa has also been made the overall administrator of the IRMT.

Roerichs’ estate comprises the premises of the Indian-Russian Memorial Complex, the Gallery of N.K. Roerich, Helena Roerich Arts College and exhibition halls in the buildings of the Urusvati Himalayan Folk Art Museum.

IRMT life-member Shakti Singh Chandel, settled here, in October last year alleged that the “store stocktaking or verification of the Roerich Museum has not taken place for the past 10 years”.

“We do not know as to what all is there in our inventory,” former Indian Administrative Service (IAS) officer Chandel said in a letter to then state chief secretary Rajwant Sandhu.

His charge came close on the heels of news that the Indian Agriculture Research Institute (IARI) in Delhi realised that two of Roerich’s paintings were stolen from its collection when authorities in London said these had come up for auction in Britain.