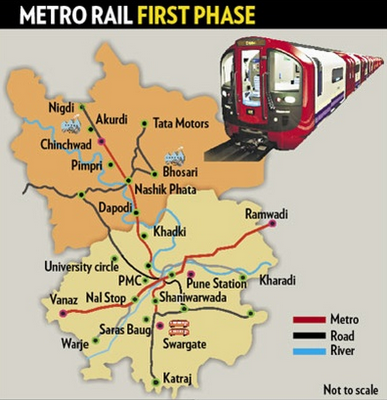 When Puneiites were beginning to give up hope of ever getting their own metro, the Union Cabinet’s approval of the Kochi metro rail project on 4th July revived their flagging spirits. The Cabinet’s approval has simplified the way ahead for Pune Metro, with the Centre’s increasing support for more such projects in cities with a population in excess of 20 lakh. The Centre is convinced that the elevated metro for intra city transportation is viable in Pune and the Centre will have 50% equity in the project.

With an estimated population of 55 lakh, the present public transport system is not well equipped to handle the increasing number of passengers. In Pune, the roads do not have adequate width and are thus unable to cater to mixed traffic conditions, both fast and slow moving traffic.

Akanksha Namdeo, a student and a frequent traveler refuses to use public transport until the situation is dire. “The buses are overcrowded and you get pushed around a lot. The frequency of buses to my area is also less and they rattle as if they’ll break down any moment”, she laments.

Many people who can afford it, prefer to travel via auto rickshaws or taxis in the city. The poor souls, who find this additional expense dear, have to resort to the vile public transportation facilities. Poorly maintained buses and drivers who feel that they own the roads are a common sight.

The Pune Metro, will be the new superhero in town. It comes as a savior by reducing the journey time from 50-75% and carrying passengers’ equivalent to 5 lanes of bus traffic and 12 lanes of private cars. “I’ve travelled on the Delhi Metro and found it to be safe and fast. I hope this system is implemented in Pune too”, says Akriti, a post graduate student in the city. “The current public transport system is unsafe and unreliable. An air conditioned train, running in a timely manner will be God sent,” she adds.

The project, which will be handled by the Delhi Metro Rail Corporation (DMRC), has an estimated daily ridership of minimum 6 lakh passengers by 2021. It’ll cover a total distance of 75.7 km and the first corridor alone would cost Rs. 8,401 crore and the second corridor Rs. 9,534 crore.

But the government, it seems, is in no hurry to ease the troubles of the people. Way back in 2009, the Maharashtra Government received the Delhi Metro Rail Corporation’s detailed report concerning the Pune Metro, it had to approve it and then forward it to the Urban Development ministry and the Centre.

In 2010 the Pune Municipal Corporation (PMC) got late in submitting the proposal to the Union government to make provisions in the annual budget for the project. Then due to red tapism and bureaucracy, the report got the green signal only on 12 June, 2012 from the Maharashtra government.

An official in the Union Urban Development Ministry reportedly said, “Cities like Patna, Lucknow, Nagpur and Pune are all entitled to Metro systems but there has been lack of enthusiasm from the respective state governments. It is not enough to send a project report, attach an application, and then claim the file is pending with the Centre. They have to come to us with state Cabinet approvals and budget details.”

According to the DMRC report, the first metro would have ‘chugged’ into the city by 2013 but due to the government’s delay, the entire project will start next year and will be completed by 2021.

Another barrier in the development and a major one at that is acquisition of land. “The PMC needs 64,435 hectares of land for the metro. Besides, there is a need for another four hectare land which could come from the agriculture college land,” says the DMRC report. But the College of Agriculture, Shivajinagar has already refused to give its land for the project. “Hundreds of projects are pending because of land acquisition issues.

It’s not unheard of for a project to get cancelled or delayed. The question is how the civic administration will deal with this problem?” asks Arushi Jaiswal, a student in the city.

But where there is a will, there is a way. If the stars align with the people of Pune willing and the government feeling benevolent, the Pune Metro will soon become a reality rather than remaining a mere sketch on paper.