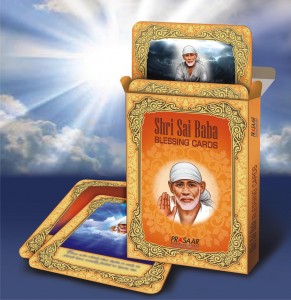 Mumbai:  Shirdi Sai Baba, regarded as a saint by his millions of devotees cutting across religions, did not leave any writings behind. But now his blessings have been encapsulated in a deck of 60 cards, each containing words attributed to him and passed on in the oral tradition that is so much a part of Indian spiritual lore.

Each deck contains 60 cards with words attributed to the 20th century spiritual leader, whose 94th death anniversary will be observed Oct 15. Devotees can use the cards to pick out, at random, words that could inspire them to solve problems mundane and major.

The brain behind the “blessing cards” is Shamshaad Ali Baig, a 44-year-old writer and healer. To go by the author, the creation was nothing short of a miracle.

“Shri Sai Baba, in his inimitable way, guided me at every step, right from the unique inspirational idea to conceptualising it and finally in producing and distributing the cards,” Baig said.

She is marketing the cards online and is in the process of acquiring a patent for them.

The Shirdi Sai Baba, revered by millions across the country, lived in Shirdi town of Maharashtra’s Ahmednagar district. He died Oct 15, 1918, leaving behind legions of followers and devotees. Shirdi has become a thriving pilgrimage centre and evcry day tens of thousands troop to his shrine and other sacred spots associated with the life of the sage who lived his life like a mendicant and has followers of all faiths.

Baig’s cards may look like other such in the market, but she claims that this is the first time such a compilation of Sai Baba’s words has been made available thus.

The deck has 60 utterances of Sai Baba, drawn from his teachings and public discourses. There are colourful designs on the cards, which could serve as a step-by-step guidebook for conducting people’s daily affairs.

According to Baig, although the Sai Baba did not write anything down, his followers were profoundly moved by what he said and remembered his words long afterwards.

“Those words and sentences are very powerful. I have selected a few for the deck. From Sai Baba blessing cards, one can seek his blessings and guidance in our day-to-day life, or get answers to various challenging phases. The cards are a means to connect with the divine and seek answers from it,” Baig explained.

Baig confessed that when Sai Baba’s first inspiration came to her a year ago, she was unsure of taking up the venture. “I wondered who would accept Shri Sai Baba cards when the market is flooded with thousands of tarot cards and other such things that help foresee the future,” she said.

Another worrying thought was that Sai Baba’s messages were philosophical and Baig wondered if she could address the concerns of ordinary people relating to love relationships or money matters with the cards.

Baig claims that it was while she was attending a spiritual programme of Master Zhi Gang Sha in May that she finally made up her mind.

“At one of the sessions, I saw Shri Sai Baba standing on the stage and urging me: ‘Why do you worry about the finances? Everything will be taken care of. Don’t worry, you just start, I am there to support you’,” Baig said.

Baig claims that just as she was promised in that vision, everything fell in place in time. “The ticklish issue of finances was resolved peacefully.”

Recounting an experience of Sai Baba’s “leela” or miracle, Baig said that when the first rush of prints arrived from the press, she saw that in one of the pictures, the colours did not match the original.

“I knew that it was a minor error. No one who had not seen the original would know, but I was beset with guilt and sought the Sai Baba’s guidance,” Baig said.

She said she raised the matter with the printer, who shrugged and told her that the printing was done and it was too late to change anything.

“Just then, the press production supervisor said the problem could be rectified. He tinkered with the machine, and lo and behold! Corrected versions of the cards came rolling out,” said Baig.

She hastens to add, however, that the cards cannot be used for astrological purposes; they offer only “divine guidance”.