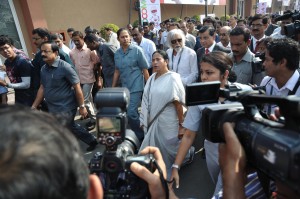 Banerjee told a news conference that Trinamool’s six ministers — one cabinet and five ministers of state — would submit their resignations to Prime Minister Manmohan Singh Friday.

“Our ministers will submit their resignations to the prime minister. We are withdrawing our support from UPA-2,” Banerjee said, speaking mainly in Bengali.

The decision was taken at a three-hour meeting of Trinamool leaders following a hike in diesel prices, allowing FDI in multi-brand retail and capping the number of subsidized cooking gas cylinders to consumers.

The Trinamool, with 19 members in the Lok Sabha, was the second largest constituent in the multi-party UPA.

The decision brings the UPA’s effective strength in the 545-seat Lok Sabha from 273 to 254, which is slightly below the half-way mark.

This would make the UPA more dependent on the Samajwadi Party and Bahujan Samaj Party, both of which extend outside legislative support to the UPA regime.

At her presser, Banerjee lashed out at the Congress, saying the FDI decision was unveiled to divert attention from the coal blocks allocation controversy involving the government.

She accused the Congress of acting unilaterally, without giving due respect to its allies. “We cannot tolerate this.”

“If FDI is allowed in retail market, where will the retailers go? There will be a disaster,” she said.

The Trinamool chief demanded to know why the government was not making efforts to bring back the huge volumes of black money allegedly stashed by Indians in foreign banks.

“Somebody has to bell the cat,” she said, explaining her decision.