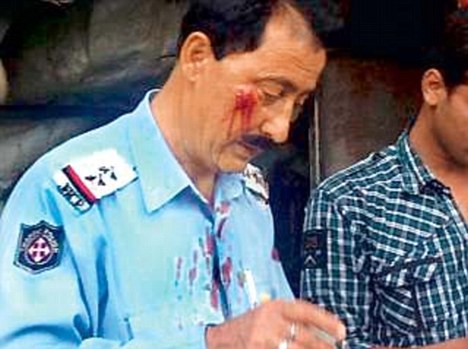 A top police official who wished anonymity said that top brass has been directed by the government to dismiss the services of both the security men.

Criminal proceedings have also been initiated against the duo- Mohammad Shafi and Mohammad Abbas who had severely thrashed Sub Inspector Mohan Lal.

Both the PSOs, Muhammad Shafi and Muhammad Abass, were arrested Monday evening on the charges of attempt to murder (Section 307) of a traffic police officer Mohan Lal, near J&K Bank Corporate Headquarters.

Lal was regulating traffic on his allotted beat when the cavalcade of the minister passed the area and did not wait for traffic signal. Upon being asked to stop, the minister’s PSOs thrashed the officer. Lal was shifted to SMHS Hospital for treatment; however the PSOs fled the spot.

However minister claims that he was unaware of the incident, “Happened in my rear escort…if I knew this was happening, I would have stopped it. I am a law abiding man,” Mohiuddin was quoted saying. Calling the incident “highly regrettable”, Mohiuddin said he had no inkling about the incident.

Following the uproar Jammu and Kashmir Chief Minister Omar Abdullah on Tuesday morning tweeted to say that the guards involved in the incident have been arrested and booked. Omar has also recommended the strictest possible action under the law.