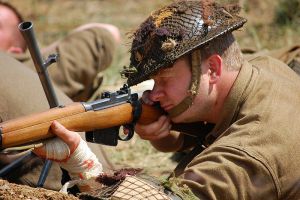 London: Hundreds of British soldiers will be investigated for crimes allegedly committed during the Iraq war, the Telegraph reported Sunday.

Investigators with the Iraq Historic Allegations Team (IHAT) have identified more than 100 serving and former members of the armed forces who they want to interview about the alleged torture of Iraqi civilians.

However, the Telegraph said the number could rise as IHAT begins reviewing the evidence from two public inquiries into the alleged war crimes.

British lawyers acting for Iraq claim the abuse took place between 2003 and 2008, when many civilians were detained on suspicion of being in Shia militia groups.

The majority of the allegations are based on witness statements by Iraqis, most of whom are seeking financial compensation from Britain, sources told the British daily.

Lawyers acting for troops questioned by IHAT, however, said the evidence against them was “extremely weak”.

One lawyer said his client, a member of the special forces, was accused of “inhumane and degrading treatment” of a detainee because the suspected gunman had not been allowed to eat for 24 hours, when he had been in British custody for only four hours.

“It later transpired that he had been attacking British troops for at least 12 hours, which explained why he hadn’t eaten. Yet those facts hadn’t been considered,” the lawyer was quoted as saying.

In another case, a British interrogator was alleged to have assaulted an Iraqi by “hitting him on the back of the head with a piece of rolled-up A4 paper”.

And in a third charge of assault, it was alleged that two interrogators brutalised a suspected Iraqi insurgent by making him do heavy exercise over several hours.

But video evidence revealed the suspect was only out of the interview room for two-and-a-half minutes, the Telegraph reported