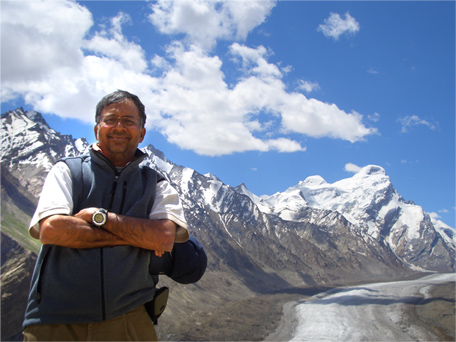 New Delhi: He turned a family company into the world’s largest transformer board manufacturer with a presence in 25 countries before divesting it to start a material sciences laboratory in Mysore. If he continues in the same vein as his debut novel “The Shadow Throne”, Aroon Raman could well become the Robert Ludlum of the Indian thriller genre.

“It was my intent to place ‘The Shadow Throne’ (Pan Macmillan) against a backdrop that mirrors current underlying reality – especially as it applies to India’s current political predicament and its inevitable impact on our geopolitical security,” said Raman, who was in the capital to promote the just published book, which has an initial print-run of 20,000 copies.

“That we are passing through challenging times on the internal and external security front seems widely accepted, and political and bureaucratic stasis in times like these can have far-reaching consequences,” he added.

“The Shadow Throne“, in fact, is 52-year-old Raman’s second novel, but the first to be published. The previous work, tentatively titled “Abduction”, an adventure set in Mughal India, had been accepted by Pan Macmillan but the publisher wanted a more contemporary work. 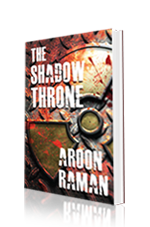 Thus, “The Shadow Throne”, a roller-coaster ride of nail-biting suspense, takes off from the May 2, 2011, killing of Osama bin Laden by US Navy Seals in his Abbottabad hideout. Pakistan’s spy agency Inter-Services Intelligence (ISI) and the army have their back to the wall as the country’s relationship with the US hits rock bottom. On the other side of the border, India too is gripped with a crisis of scandal and political paralysis.

Against this backdrop, a shadowy group – a collection of individuals from Indian intelligence and security agencies – plans an audacious nuclear strike by smuggling a Pakistani ballistic missile into Afghanistan and firing it into India from the Durand Line, the Af-Pak frontier, in the hope of igniting a sub-continental Armageddon. Just two men and a woman – an Indian journalist, a police officer and a college lecturer – stand between them. Do they succeed?

The proof lies in the reading, but one thing is for for sure: Here is India’s Robert Ludlum in the making.

Raman’s journey into adulthood began in the late 1980s with a post-graduate degree in economics from New Delhi’s Jawaharlal Nehru University and an MBA from The Wharton School, University of Pennsylvania, majoring in finance and marketing.

He ran his family company, Raman Boards Limited, from 1994 till 2006. Under his leadership, Raman Boards became the third largest player in the transformer board market globally, with a sales presence in more than 25 countries and a client list that included companies like Siemens, ABB, Alstom and Hyundai. The company also set up its largest manufacturing facility in China in 2006.

In 2007, he divested Raman Boards to ABB – the world’s largest power products company – and promoted Raman FibreScience, a research and innovation company in the area of technical non-wovens and composites.

So, how did the writing bug come his way?

“Conan Doyle, Rider Haggard and Kalki’s novels in Tamil fired my imagination at an early age with their classics of detection and adventure and I’ve been hooked to a good yarn ever since. I also love history and travel writing,” he said.

Raman now divides time between his business and other personal interests. He is a keen tennis player and trekker. He also regularly contributes features to The Hindu Sunday Magazine and will feature at next month’s Kovalam literary festival.

Raman can be visited at www.aroonraman.com. “The Shadow Throne” can also be followed on Facebook.