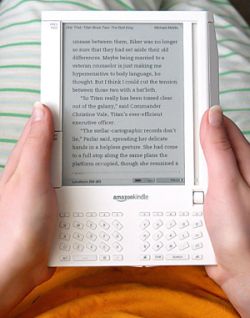 Kindle Paperwhite is a black-and-white e-reader with a front-lit display. The redesigned screen allows users to read easier in the dark and offers more contrast as well as brightness, reported Xinhua.

The Paperwhite technology enables the new Kindle to have as much as eight weeks of battery life, making the device highly power-efficient.

The device can also calculate users’ reading speed and give estimates how long it will take the user to finish a given chapter or the whole book.

Scheduled to ship Oct 1, Kindle Paperwhite will start from $119, while the model with a built-in 3G connection sells for $179.

Meanwhile, the focus of the company’s media event held Thursday in Santa Monica, California was the 8.9-inch Kindle Fire HD tablet. The device boasts a faster chip from Texas Instruments and the HD screen has 25-percent less glare with a laminated touch sensor.

Kindle Fire HD has dual stereo speakers with Dolby Digital Plus, making it the first to have such a feature on the tablet market.

It also has a feature called WhisperSync Voice, allowing users to sync between an audio book and the text version of the book.

The 16-gigabyte Kindle Fire HD costs $299 and will ship in November. The device will also come with a 4G model that has 32 gigabytes of storage and costs $499.

According to Amazon, Kindle Fire HD is much more affordable than Apple’s latest model of iPad. It offers a data plan of $50 per year for 250 megabytes of data per month and 20 gigabytes of cloud storage.

The debut of Kindle Fire HD is seen as Amazon’s new strategy to step up competition against Apple, which is expected to introduce a smaller iPad, possibly called “iPad Mini”, at a media event in October.