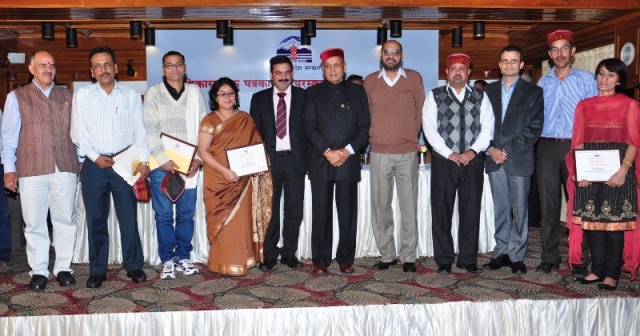 With over 40 years experience in mainstream journalism and having worked with India’s leading English newspapers – The Times of India, The Indian Express, The Pioneer among others, Jagdish Bhatt currently is editor with Hill Post.

For the year 2010, the state award was given to Hem Lata Verma for her story ‘At Apple Pad Another Revolution’ that appeared in India Express on May 21, 2010.

In the electronic media category for the year 2009, Sanjeev Sharma editor at Hindi Hill Post was conferred the state award for the story ‘Yog Paryatan’ telecast on MH-1 on July 4, 2009.

For the year 2010, Anil Goma was handed the state award for the story ‘Polythene Hatao- Paryavaran Bachao’ telecast on Punjab Today on April 23, 2010.

For the year 2011, Monica Chauhan, the reporter for Day and Night News Channel was conferred the state award for the story ‘Rehabilitation of Sex Workers in H.P.’ telecast on December 1, 2011.

Speaking on the occasion the chief minister Dhumal asked journalists to protect their credibility.

He said, “media was playing the role of a watch dog of the society and it had to rise to the expectations of the people by building its credibility among them.”