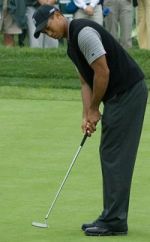 The world’s two most famous golfers will be the only competitors in the 18-hole Jinsha Lake matchplay contest.

McIlroy, 23, returned to the top of the rankings after winning last week’s PGA Championship by eight strokes for his second major title, having won last year’s US Open by the same margin.

The North Irishman will make his way to Zhengzhou from the BMW Masters in Shanghai which finishes on Oct 28. Woods, currently World No.3, is scheduled to fly in from Malaysia, where he will play the CIMB Classic.

Woods has won three times this year and earned his 100th career worldwide victory. His win at the AT&T National tournament was his 74th on the PGA Tour passing Jack Nicklaus’s total and placing him behind only Sam Snead in career wins.

“It’s an exciting concept and it will be a lot of fun going head-to-head with Tiger,” McIlroy said.

“The duel at Jinsha Lake will be the first time myself and Tiger will come together to play a ‘one-off’ match like this, so I’m really looking forward to it.”